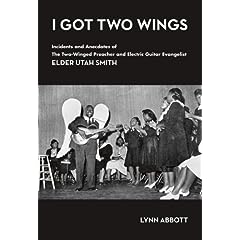 Title: I Got Two Wings: Incidents and Anecdotes of the Two-Winged Preacher and Electric Guitar Evangelist Elder Utah Smith

Author and historian Lynn Abbott has stitched together an entertaining narrative about Elder Utah Smith, an all but forgotten Pentecostal preacher, showman, musician and proselytizer whose dynamic style often included comic repartée, and whose loud electric guitar was a feature of his services from the 1930s (when amplified guitars were first marketed) to his death in 1965.

Smith’s ecclesiastical career in the Church of God in Christ began in 1925. He developed his trademark song which converted the old spiritual “I Want Two Wings” into a more assertive “I Got Two Wings.”  And it was not a metaphor–old photos show him with large, imposing white wings attached to his shoulders next to a guitar strap.

Utah Smith’s career path took him from New England to New Orleans. He was preaching near New York City in 1941 when some white jazz fans and New York Tribune music critic (and composer) Virgil Thomson “discovered” him and arranged for him to perform as part of a Sunday afternoon concert series at the Museum of Modern Art. Though Thomson liked what he heard,  the book includes embarrassingly unsympathetic newspaper reviews. I won’t call them racist, but they do reveal how ill-prepared Manhattan culture brokers were for passionate Pentecostal worship and its uncompromisingly emotional music.

By 1944, Smith was in New Orleans, where he constructed a warehouse-sized Two Wing Temple in 1945.  His charismatic preaching, singing and playing dominated his well-publicized services, and there was a steady stream of visiting evangelists and gospel music stars, including Rosetta Tharpe, Brother Joe May, the Fairfield Four and Ernestine Washington. Smith, a star himself, traveled to revivals throughout the Southwest.

It’s a great story, and Lynn Abbott’s well-paced narrative is built on a solid foundation of research and interviews.  An attached CD includes several 1940s-50s performances of “I Got Two Wings” (notable, says Abbott, for their “spontaneous combustibility”) and more vintage recordings to illustrate other historical points.