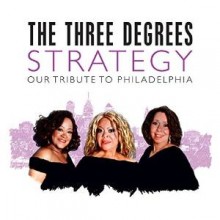 Title: Strategy (Our Tribute to Philadelphia)

Formed in 1963, The Three Degrees claim to be the longest-running female vocal group in history (though admittedly the membership has changed over the years). A mainstay of the soul and disco era, they scored many hits on Kenny Gamble and Leon Huff’s Philadelphia International Records label.

Now celebrating their 50th anniversary, The Three Degrees have released their first studio album in 25 years on British soul music impresario David Nathan’s label. Recorded in Atlanta with a full band and orchestra, Strategy (Our Tribute to Philadelphia) features “almost” original member Helen Scott, along with Valerie Holiday (who joined in 1967) and relative newcomer Freddie Pool, who has been with the trio since 2011. As with their last album, Out of the Past Into the Future (1993), the group revisits their roots by covering many timeless Philly soul classics, including the O’Jays’ “Love Train,” Billy Paul’s “Me and Mrs. Jones,” and the stand out track “Don’t Leave Me This Way” which demonstrates their super tight vocal harmonies. The album closes with a new version of The Three Degrees’ iconic hit song T.S.O.P. (The Sound of Philadelphia), better known as the Soul Train theme song.

These ladies may not be breaking any new ground, but they certainly embody the female vocal trio stylings of the ‘60s and ‘70s and serve as wonderful ambassadors, bringing the soulful sounds of Philadelphia to a new generation.