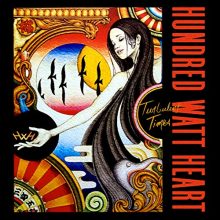 Hundred Watt Heart’s Turbulent Times is the first solo recording by “Captain” Kirk Douglas from The Roots. Joined by The Roots bassist Mark Kelley, the Hundred Watt Heart is a Black rock power trio rounded out by drummer Ricc Sheridan from the band Earl Greyhound (the three also perform together as The Dust Rays). Given the power trio theme, it is appropriate that this album was recorded at Jimi Hendrix’s Electric Lady Studios in New York. The eight tracks feature excellent songwriting and musicianship that is at times bare-bones rock and roll, and at other times well-produced pseudo-psychedelia. The entire band is first-rate, and Douglas is outstanding both as a vocalist and a guitarist. Perhaps most impressive is Douglas’s restraint as a guitar player. On tracks like “Uma” he demonstrates that he can play at a top-tier level when he wants to, but unlike some other highly technical guitarists, Douglas does not populate the entire album with flashy guitar licks. END_OF_DOCUMENT_TOKEN_TO_BE_REPLACED