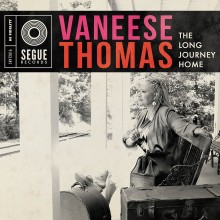 Listening to The Long Journey Home feels like a night-long dance party as each song tests the boundaries of southern American roots genres. Vaneese Thomas celebrates her family and musical heritage in this latest album, following her most recent release Blues for My Father (2014). Raised in a talented and renowned musical family, Vaneese is the youngest daughter of Rufus Thomas and sister of Carla Thomas. R&B, soul, funk, and blues styles come naturally to Vaneese, and her ability to wield and experiment with these song varieties is evident in The Long Journey Home.

Vaneese demands complete attention in her performance using powerful vocals with a full band including harmonica, electric guitar, and a brass section. She kicks off the album with “Sweet Talk Me,” a rockin’ rhythm and blues song with a catchy refrain and a chorus of back-up singers beckoning listeners to the dancefloor. The album follows into “Lonely No More,” a song keeping with the Delta blues tradition about reclaiming self-confidence. The catchiest song of the album, “Sat’day Night on the River,” starts up with full energy and a swinging saxophone solo by Cliff Lyons. Perhaps one of the most surprising songs on this album, because of its unique blend of genres, is “Country Funk.” Demonstrating exactly what its title implies, Vaneese sings “I just can’t get enough of that country funk” while the percussion and brass section support elements of funk music, and dobro, banjo, and fiddle intertwine creating an intriguing mix of music traditions. The genres highlighted on this album convey Vaneese’s appreciation for the musically diverse reputation of Memphis.

Vaneese wrote songs on The Long Journey Home about her concerns on past and current social justice issues. Civil rights, imbalances of political power, and the need for love and kindness are common themes in songs such as “Mean World,” “Rockin’ Away the Blues,” and “The More Things Change,” during which she reflects on Sam Cooke’s timeless hit “A Change is Gonna Come”:

Hardly a damn thing has been done.

Well ain’t it funny? I said, it’s a shame

Vaneese attempts to offer something for everyone on this album, whether they are songs about love and inspiration as in “Mystified” and “Prince of Fools” or songs with heavier blues and gospel roots like “I Got a Man in TN” or “Revelation.” The album closes with a cover of “The Chain,” originally written by Fleetwood Mac. It is a distinctive concluding track relative to the rest of the album for its minimalist acoustic instrumental section. Nevertheless, Vaneese sings out with her heart’s full power, which she sustains throughout the album.