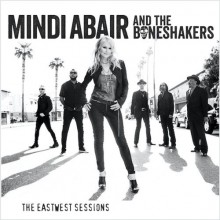 Artist: Mindi Abair and the Boneshakers

Label: Pretty Good for a Girl

Detroit raised, Motown trained guitarist Randy Jacobs formed The Boneshakers in 1994 to “project his vision of funk, blues, R&B, rock and soul into the universe.” Current members of his band include gritty soul singer Sweet Pea Atkinson, bassist Derek Frank, keyboardist Rodney Lee, and drummer Third Richardson. Two years ago, The Boneshakers teamed up with saxophonist, singer-songwriter Mindi Abair on the album Live in Seattle, and the collaboration was so successful they have been touring together ever since. Their second joint release, The EastWest Sessions, reflects the name of the Hollywood studio where the project was recorded under the guidance of noted blues-rock producer Kevin Shirley.

The album opens with Abair taking over the vocals on the hard rocking ‘Vinyl.’ True to the lyrics, the song is “in your groove like a needle on vinyl.” Following is “Not That Kind of Girl,” which allows Abair to strut her stuff on sax, bringing down the house with this raucous party song. “Play to Win” is another hard rocking anthem, a feminist mantra espousing a no-holds-barred philosophy that continues into the bluesy “Pretty Good for a Girl.*” This extended track about the difficulties of being a woman in a man’s world finds Abair trading solos with her old friend, guitarist Joe Bonamassa.

The Boneshakers take over on “Let Me Hear It From You.” Sweet Pea Atkinson covers this Sly Stone ballad with a voice steeped in soul, then takes us to church with a gospel style chorus as the song comes to a close. Another notable track is “Freedom,” an instrumental with Abair and Jacobs both letting loose in a battle for dominance, then coming together in harmony over the sweet chords of the B3. Without a doubt, the most interesting track on the album—the one that makes you jump up and shout “what is that?”—has got to be “She Don’t Cry No More.” Written by and featuring Fantastic Negrito, this slow dirge of a blues song conjures up the soul of Robert Johnson and throws it into a chain gang where Abair’s sax wails like a banshee over the relentless rhythm. Seriously, this song will haunt you for days. The album concludes on a lighter note, passing the mic back to Abair who sings “I Love to Play the Saxophone” over finger-picking guitars.

The EastWest Sessions is by far the best collaboration to date between Mindi Abair and The Boneshakers, with its rotating blend of jazz, blues, rock, soul and smooth groove.

*Pretty Good for a Girl is also the name of a website hosted by Abair with a mission to motivate, inspire and empower women.