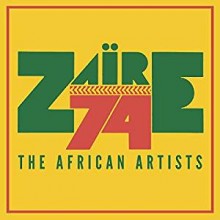 In conjunction with the Muhammad Ali-George Foreman “Rumble in the Jungle” fight, trumpeter Hugh Masekela and concert promoter Steward Levine planned a 3-day music festival in Kinshasa, the capitol of what was then Zaire (now called the Democratic Republic of the Congo). Held in the country’s largest sports stadium, the event included performances by James Brown, Bill Withers, the Crusaders, the Fania All-Stars with Celia Cruz and Ray Barretto, and other American stars. Also featured were the top stars of Zaire and folk singer Miriam Makeba, who hailed from Masekela’s home country of South Africa.

When the fight was delayed due to Foreman suffering a training injury, the music festival became a stand-alone event, three weeks removed from the “Rumble in the Jungle.” Both the fight and the musical performances of the American artists were previously well known, in part via the excellent documentaries. The Oscar-winning When We Were Kings documented the fight and Soul Power captured the American musical performances with some brief African musical segments, plus the behind-the-scenes story of staging the festival. Now, finally, the complete performances of the African artists have been released.

According to Masekela’s liner notes, even though all of the music performances were well recorded with modern equipment, event promoter Don King tied legal knots around releasing it. Given King’s history of, to put it charitably, non-traditional business dealings, Masekela’s version of events seems credible. In any case, most of the performances on this 2-CD set haven’t been available until now, 43 years after the event.

Miriam Makeba was already world-famous in 1974, and she put on a superb performance in Zaire. Like the other artists, she prepared a “Praise Song” for the country’s ruler, Mobutu Sese Seko. This was probably part tribute to the man who had led Zaire to independence from Belgian colonization, and partly insurance for safe passage in a country ruled with an iron fist by Mobutu.

Although all of the artists featured in the album offer something worthwhile, two bands stand out. Tabu Ley Rochereau and Afrisa present a guitar and horn-driven funk style that would be at home in the Nigeria of 1974, or opening up for James Brown. Franco and T.P.O.K. Jazz was already popular in Zaire, and they put on a flawless and fast-paced performance. In the interest of full disclosure, almost all lyrics are sung in non-English languages. The horn runs, complex beats and funky song structures are at home in any language.

This album makes a great companion to the two excellent documentaries, all mementos of a long-ago Big Event.