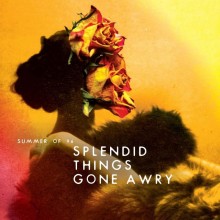 In case you’re still searching for the perfect summer soundtrack, look no further than this new project from Atlanta based singer/songwriter Lonnee Stevens (aka Alonzo Stevenson) and Philadelphia-based composer/producer Antman Wonder, collectively performing as the Summer of ’96. Their group name references the watershed year for hip hop that produced landmark albums by Nas, The Fugees, OutKast, The Roots, 2Pac, and A Tribe Called Quest, among others.

Hearkening back to the golden era of hip hop, the duo use live instrumentation to weave a seductive blend of jazz, soul and rap to create a contemporary soundscape. Stressing that no samples were used in the making of this album, Antman created the original compositions which were then revised and expanded upon by Stevens. Standout tracks include the provocative “Not a Rich Man” featuring Royce 5’9, the harmonically complex “Mahogony Blue” featuring vocals by Lonnee and Teedra Moses, the multi-layered “All That Jazz,” and the cinematic “Wondersong” that’s awash with flute and strings.

Bowing out with the title track featuring Bill Kahler on sax, Antman and Stevens provide a satisfying conclusion to Splendid Things Gone Awry by showcasing their multitude of musical influences.