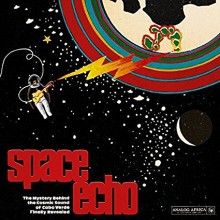 Although this album is a compilation of actual music made by real-life musicians in the 1970s and 1980s, Analog Africa chose to anchor its theme to a fantastical and somewhat bizarre myth of a ship full of electronic keyboard instruments mysteriously appearing in a farm field in the island nation of Cape Verde, located off Africa’s west coast (see the album’s webpage for the full text of the music’s “creation myth”).

Back in the realm of facts, much of the music in this single-disc compilation was either written or performed by the band Voz de Cabo Verde, lead by Paulino Vieira. This group was sort of the Motown or Stax house band of Cape Verde’s musicians, performing at recording sessions both at home and in Portugal. As with all the Analog Africa compilations, it’s worthwhile to buy the physical media (CD or 2LP set) in order to read the extensive liner notes. The booklet includes interviews with some of the musicians and an article about Cape Verde musical traditions.

The Cape Verde flavor of Afro-pop is a keyboard-heavy mashup of dance rhythms, Portuguese and Brazilian influences and native beats. It is at home at a lively party or in a dance club today. Worth a listen if you’re in the mood for something different but accessible. Belief in the ship-in-the-field “creation myth” is optional.