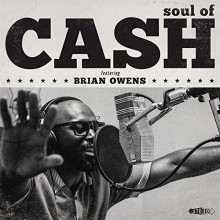 Few African American artists have succeeded in country music. As Charles L. Hughes wrote in his groundbreaking book, Country Soul,* “In the 1960s and 1970s, nothing symbolized the rift between white and black in the United States more than the music genres of country and soul.”  Those who did cross musical boundaries to dip a toe into country music typically infused generous drops of blues, gospel and soul. Classic examples of this fusion include Ray Charles’ highly successful Modern Sounds in Country and Western Music (1962), Joe Tex’s Soul Country (1968), and Linda Martell’s Color Me Country (1969), to name just a few.

Enter soul singer Brian Owens. This preacher’s son from Ferguson, Missouri, first saw Johnny Cash on TV when he was 11 years old. Later, as an up-and-coming soul singer in his mid-20s, he was fascinated by the Cash biopic Walk the Line (2005), and decided there was just something about the famous country singer’s music and life story that really resonated. Perhaps the idea for a cover album has been germinating since that moment; whatever the case, the project has now come to fruition with Soul of Cash.

With this album, Owens seeks to bridge the divide by demonstrating that “a white man born in the South, who’s now passed on” and “a young African-American guy born in the Midwest, raised on soul music” can find common ground through music. Supporting Owens on this endeavor are a number of special guests as well as members of his regular backing band, The Deacons of Soul: Alvin Quinn (bass), Rob Woodie (drums), and Shaun Robinson (guitar).

While some singers might have sought out lesser known songs, Owens reaches for the gold ring, covering seven of Cash’s most iconic hits. Opening with “Ring of Fire,” he follows in the path of Brother Ray, but where Charles’ sweetened the mix with strings, Owens’ rendition punches in with a Stax-style horn section and the talented Daru Jones on drums, while Nashville session musician Zander Wyatt provides the country twang on acoustic guitar. This is followed by “Folsom Prison,” which Cash sang over a chugging acoustic guitar. Owens, however, raises the rafters with his uptempo rhythm and blues delivery, accented by Tripp Bratton on congas.

On “Walk the Line,” Owens captures the essence of the original version, but substitutes a driving, syncopated rhythm and gospel inflected vocals that heighten the emotional intensity of the lyrics. If there was ever a song that calls out for a soulful crossover version, it’s “Cry, Cry, Cry.” Owens fulfills this mission while still respecting the simplicity of the original, with excellent backing vocals by Anita Jackson and Trunesia Combs. Country music fans may enjoy “Sunday Morning Coming Down” and especially the mournful “Long Black Veil,” which maintain their country roots with pedal steel by Tony Esterly.

The final cover song, “Man in Black,” really struck a chord with Owens, who has seen his share of injustices on the streets of Ferguson. Indeed, any given line is as relevant today as when the song was written, including the second verse: “I wear the black for the poor and the beaten down / Livin’ in the hopeless, hungry side of town / I wear it for the prisoner who has long paid for his crime / But is there because he’s a victim of the times.”  This is definitely one of the highlights of the album, with Owens’ passionate delivery echoed by The Vaughans on backing vocals.

The album closes with an original, “Soul in My Country,” by Owens and Rissi Palmer, who share vocals with Robert Randolph sitting in on pedal steel. Ending on the refrain, “It’s a feeling I know / it’s the soul in my country / the country down in my soul,” the song expresses the commonalities between the genres. As Owens explains, “You shouldn’t look at me strange if I say I dig Johnny Cash, because I don’t look at you strange when you say you dig Otis Redding or Sam Cooke or Marvin Gaye. All of these guys came out of the church; that’s what binds them and us together.”

One album can’t heal the soul of this country, but with Soul of Cash Brian Owens proves that bridging the divide can bear sweet fruit.