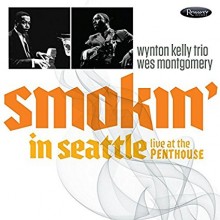 Title: Smokin’ in Seattle: Live at the Penthouse

This is Resonance Records’ fourth CD release of classic performances by Wes Montgomery, clearly making this label one of the major documenters of Wes’s remarkable career. The first three releases capture Wes’s earliest days performing in Indianapolis and as a leader and member of other small groups.  Smokin’ in Seattle captures his final recorded performance with the Wynton Kelley Trio in a club setting in Seattle two years before his early death. Every follower of Wes’s career must own these four releases.

Wes Montgomery’s earliest recorded appearances were captured when he was a member of Lionel Hampton’s Orchestra, including his first broadcasts in 1948 and continuing on studio recordings released by Decca continuing through early 1950. Resonance Records has played a major role in extending Montgomery’s early recorded legacy with its previous releases, In the Beginning (including the separately issued LP titled Live at the Turf Club), Echoes of Indiana Avenue, and One Night in Indy. The former couples an overlooked Montgomery Brothers session for Columbia Records in 1955 with live performances at the Turf Club in Indianapolis captured in August 1956. The second adds other live recordings from clubs in Indianapolis in 1957-1958, while the latter adds a performance before members of the Indianapolis Jazz Club in 1959.  Wes lived in Indianapolis and was known to local jazz fans, explaining the location of most of these recordings.

Wes’s national reputation began to develop when Pacific Jazz and World Pacific released recordings by the Montgomery Brothers in 1957 through 1959; however, Wes’s career skyrocketed with his move to Riverside Records in October 1959 following the release of his third and classic album for that label, The Incredible Jazz Guitar in January 1960. Almost immediately, guitarists began to flock to clubs to observe Wes and to study his unique style of playing in octaves.  Resonance Records’ third Montgomery CD, One Night in Indy, dates from just months before the start of Wes’s Riverside recordings. All of these Resonance CDs were previously reviewed in Black Grooves.

Wes moved to Verve Records in 1964, capitalizing on his growing fame, and toured Europe in 1965 where a number of bootleg recordings capture his performances on television and in various concert and club settings with small groups. Verve captured his first recording with the Wynton Kelly Trio in an exciting performance in June 1965 at the Half Note; however, Verve increasingly focused on Wes performing as featured soloist with large jazz orchestras and emphasizing more ‘popular’ songs to broaden the sales of his releases. This ultimately led to the final phase of Wes’s career, when he moved to Herb Alpert’s A&M Records.  While these became ‘pop’ recordings, Wes never lost the unique elements of his style.

The latest release from Resonance is Smokin’ in Seattle: Live at the Penthouse, which again features Wes with the Wynton Kelly Trio, is taken from a live FM radio broadcast during a club engagement in Seattle on April 14 and 21, 1966. This places the recording six months after the Montgomery-Kelly Verve release. Other recordings of this notable pairing have appeared, featuring them in 1965; however, Resonance captures their final recorded encounter.  The CD, while clear and well-recorded, is not quite up to the standard of top studio quality sound in capturing the sound of Wes’s guitar; however, the overall quality of the performances more than compensate for this slight imperfection. The musicians complement one another throughout, and Wes performs with gusto. Truly, with this release, Resonance Records has made another notable contribution to the jazz legacy of Wes Montgomery. Jazz fans throughout the world should celebrate.

The CD features the Wynton Kelley Trio (Wynton Kelly on piano, Ron McClure on bass, and Jimmy Cobb, drums) on four of the performances, adding Wes as the featured artist on six others. Unfortunately two of those six are faded out due to union-imposed restrictions on the length of live broadcasts from clubs. Nevertheless, there is much to enjoy.

Wes and Wynton had recorded together several times, beginning with a Riverside session led by vibraphonist Milt Jackson in 1961.  Among the included songs, Wes had previously recorded “Jingles” during the Riverside session with Jackson and “What’s New” and “If You Could See Me Now” with the Wynton Kelly Trio released in their album on Verve. “West Coast Blues,” Wes’s original composition, was a staple in his repertoire, including its first appearance on The Incredible Jazz Guitar.

It is important to point out that the Jobim tune listed on the disc is identified as “O Morro Nao Tem Vez,” while to my ear it is actually “O Amor em Paz (Once I Loved).”  This is but a small distraction and in no way detracts from the care taking to assemble a wonderful release that includes interviews with several musicians and others with connections to the production and original session.