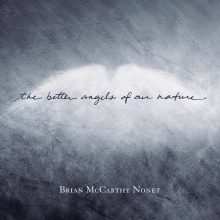 Title: The Better Angels of Our Nature

This month sees a new release from Vermont-based saxophonist, composer, and music educator Brian McCarthy that’s scheduled to drop a week before Juneteenth.  The Better Angels of Our Nature features McCarthy and his nonet reimagining songs from the Civil War and composing original songs inspired by the conflict.  The project, with its title garnered from Abraham Lincoln’s first inaugural address, is both an academic and artistic endeavor. McCarthy explores music from a dark period of American history in an effort to chart new thematic and musical territory. This project was funded in part by a Vermont Arts Council Creation Grant and combines McCarthy’s personal interest in history with his masterful interpretation of both familiar and new music.

Setting up musical and thematic tension among these Civil War-associated tunes is key to McCarthy’s approach to this material.  He directly juxtaposes the Confederate anthem “The Bonnie Blue Flag” with the “Battle Hymn of the Republic,” situates a bluesy attempt to reclaim “Dixie” next to a reading of the spiritual “Oh Freedom.”  Even the original compositions on this album evince a kind of tension—the multi-part title track reads as a character study of Lincoln, contrasting his roles as lawyer, President, and person.

One of the standout features of this album is that there are no standout players. This is a narrative jazz record and each note played by each musician serves McCarthy’s impressionistic reading of the Civil War by exploring its music, an approach that suggests both schism and unity (it is likely no accident, for instance, that some of the Union tunes included on this album were parodied by southerners during the war). It may be too much to try to draw contemporary comparisons to the seemingly intractable divisions in contemporary American social and political life, but McCarthy’s interpretation of seemingly arcane music allows him to deal with some conceptually significant undercurrents in American culture.