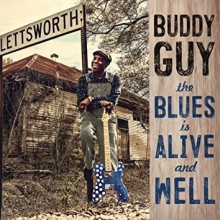 Title: The Blues is Alive and Well

Immediately upon hearing his mesmerizing riffs, this blues novice could tell I was in the presence of a legend. The Blues is Alive and Well, the latest release from multiple Grammy and award winner Buddy Guy, demonstrates that this icon is throwing us what could arguably be his most skilled offering yet. In recognition of his many contributions to the genre, The Americana Music Association is awarding Guy a Lifetime Achievement Award on September 12th in Nashville’s Ryman Auditorium, complimenting his 2015 Grammy Lifetime Achievement award and his more than 50 years as a blues innovator, musician and mentor. To say that Buddy Guy has a long history with the blues does not do him justice—according to numerous musicians, Buddy Guy IS the blues, period.

Guy opens the 15-track album with “A Few Good Years,” a haunting, rambling slide number showcasing his trademark growl and lyrically addressing the desire to do what he does best for just a little while longer: “A few good years/is all I need right now.” “Guilty as Charged” testifies exactly as you would expect—an uptempo confessional sermonizing not only the singer’s introspectiveness but also Guy’s legendary steel-driving artistry. “Whiskey for Sale” is a call-and-response between the vocals and Guy’s guitar as they negotiate their trade, and the invigorating work song rhythm on “Ooh Daddy” remains with you long past the last chord drop.

Collaborators weigh in on Guy’s blues mission, as well, including several British musicians profoundly influenced by the genre. Rolling Stones frontman Mick Jagger and guitarist Keith Richards contribute to the ‘killing floor’ offering “You Did the Crime” and the warm and fuzzy “Cognac,” respectively, as does another rock guitarist, Jeff Beck. Being that the Rolling Stones began as a band called “The Blues Boys” and they’ve paid homage to Guy in the past, the participation of Jagger and Richards comes as no surprise. “Blue No More” introduces guitarist James Bay, a worthy up-and-coming blues man in his own right.

Taking down the tempo a notch Louisiana blues style, “When My Day Comes” mesmerizes with its plodding tempo and dark undertones about what is yet to materialize. “Bad Day,” a dark but electric musing, warns of how even the best person can reach their wit’s end sometimes. But in the end, Guy’s line, “You can call me old-fashioned/but I still know how to have my fun” on the track “Old Fashioned” sums up this album—and indeed, his entire career.

Guy sounds every bit as vital and youthful on this album as he did on his early collaborations with the late Junior Wells, and it’s inspiring to hear a veteran artist laying down the blues with such continual precision time and again. Both timeless and cutting edge, The Blues is Alive and Well proves that when it comes to Buddy Guy and the blues, 81 is certainly the new 21—no bones about it.