“Glory, Glory to the New Born King”: Gospel at Christmastime 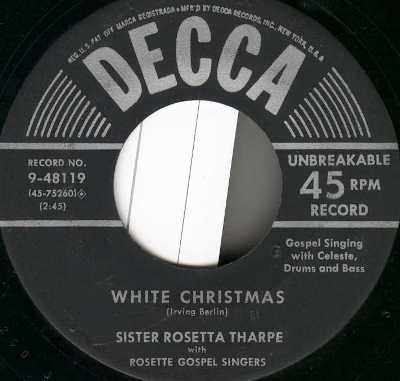 Today, nearly every popular gospel artist has a Christmas project in his or her catalog. The Mississippi Mass Choir, Luther Barnes, and Yolanda Adams are among those releasing Christmas albums this season. But when did the tradition of gospel artists recording Christmas carols begin? One is inclined to answer that Mahalia Jackson set the standard in 1950 with her Apollo recording of “Silent Night,” but the tradition goes back much further, more than two decades before the release of Mahalia’s disc. In truth, Christmas recordings by African American sacred artists predate gospel by several years.

The Elkins Mixed Quartette, also known as the Elkins-Payne Jubilee Singers, is the first known African American sacred group to record a Christmas carol. In 1926, the quartet, organized by William C. Elkins, sang “Silent Night, Holy Night” for Paramount Records. Two years later, the Lucy Smith Jubilee Singers of All Nations Pentecostal Church in Chicago released their only record, a Christmas-themed disc for Vocalion: “Pleading for Me” and “There Was No Room in the Hotel.” The lyrics of the latter no doubt resonated with African Americans living in Jim Crow America, as it described the Holy Family’s futile search for available lodging.[1]

Although the Soul Stirrers, featuring the classic tenor voice of R.H. Harris, recorded “Silent Night” for Aladdin in 1948, it was the guitar-toting, Pentecostal-bred Sister Rosetta Tharpe who demonstrated the lucrative sales potential of Christmas records by gospel artists. In 1949, Tharpe, accompanied by her new background group, the Rosettes (formerly the Angelic Queens), recorded “White Christmas” and “Silent Night” for Decca. The two-sider was a smash hit, hitting #8 on Billboard‘s R&B Hit Singles chart and earning Tharpe and the Rosettes a coveted spot on CBS Television’s Supper Club with Perry Como on January 1, 1950.[2]

While Sister Tharpe’s record took the country by storm, it also took her gospel contemporaries and their record labels by surprise. Autumn 1950 witnessed a flood of Christmas singles by popular gospel singers and quartets. This is when Mahalia Jackson released her timeless arrangement of “Silent Night,” coupled with another Christmas chestnut, “Go Tell It on the Mountain,” on Apollo. These were the first of dozens of Christmas recordings Mahalia would make during her career. Not to be outdone, the Ward Singers released their version of “Silent Night” in 1950 (Savoy).

Also in 1950, Philadelphia’s Gotham Records released eight odes to the season by its top gospel sellers, namely Brother Rodney, the Davis Sisters, the Harmonizing Four, and the Angelic Gospel Singers. The Angelics’ “Glory, Glory to the New Born King” became an instant classic. Thereafter, no Christmas program in the African American community would be complete without a performance of “Glory, Glory to the New Born King.” A couple of years later, the Angelics released another Christmas single, “A Child is Born.” The song’s similarity to “Glory, Glory” in melody and arrangement was no coincidence: back then, record companies deliberately created sound-alike versions of hits, hoping that they could strike gold twice.

Eventually, Gotham had sufficient holiday product from its gospel lineup to produce a various artists LP, most likely the first gospel Christmas LP. The album, Gotham X-1, is impossibly rare. Constellation reissued it in the early 1960s as The Christmas Story (SS-106). The album is part of Constellation’s “The Scripture in Song Series,” a seven-album collection of gospel from Gotham’s vaults. Thankfully, the reissue is much easier to find.

Nineteen fifty-one witnessed new Christmas product from Savoy, including the Patterson Singers’ “Jesus, the Light of the World” and “Christmas Morn” by Charles Watkins. Watkins’ gentle crooning of “Christmas Morn” is not as well remembered today as it should be. Truth be told, had race relations been better back then, Watkins’ version would have climbed the pop charts, it’s just that good. Charles Watkins was that good. He later became a Bishop in the Pentecostal Assemblies of the World.

That same year, Sister Tharpe’s protégé Marie Knight delivered a double-sided Christmas single of her own for Decca (“Adeste Fideles”/”It Came Upon a Midnight Clear”). In 1953, the Pilgrim Travelers gave Bing Crosby’s “I’ll Be Home for Christmas” an uncharacteristically morose treatment. While Bing’s original articulated the wistful yearnings of World War II soldiers, the Travelers’ version suggested a darker and less optimistic mood surrounding the Korean Conflict. Marion Williams and the Stars of Faith heralded the coming of a new decade by releasing a beautiful Christmas LP on Savoy in 1959. Marion’s “O Holy Night” in particular enchanted many a music critic.

Christmas gospel-style reached its apex in 1962 when Vee Jay Records issued the original soundtrack album of Langston Hughes’ Black Nativity. The Christmas musical starring the Alex Bradford Singers, the aforementioned Stars of Faith, and Princess Stewart was a sensation: it toured Europe and continues to be presented the world over. Another full-length ode to Christmas released in 1962 came from a group that formerly recorded for Vee Jay. The Staple Singers’ marvelous The Twenty-Fifth Day of December was released on the group’s new label, Riverside, with Vee Jay-era accompanists Maceo Woods and Al Duncan on organ and drums, respectively. In Cincinnati, the Galatian Singers crafted a Yuletide LP of their own for King Records.

In 1963, Vee Jay released a various artists album called A Treasury of Golden Christmas Songs, featuring holiday fare by gospel artists under contract to the label, such as the Five Blind Boys of Alabama, Swan Silvertones, Caravans, and Charles Taylor. One lone track by the Gospel Clefs, the frenetic “Mary’s Boy Child,” has long confused collectors, since the Clefs were not Vee Jay recording artists. A review of Vee Jay internal documents, however, suggests that the company considered signing the Savoy artists at the time the Christmas LP was compiled, but the deal was never consummated.

Rev. Cleophus Robinson released Christmas Carols and Good Gospels for Peacock in 1967, an album that included a chilling version of “Sweet Little Jesus Boy.” In 1968, Checker Records released singles and an album of classic and new Christmas songs from its stable of artists, including the Soul Stirrers, Meditation Singers, and Salem Travelers, the latter two neatly folding anti-war sentiments into their holiday lyrics. Meanwhile, Brother Joe May, James Cleveland and the Angelic Choir, and countless other artists contributed singles and LPs to the gospel Christmas catalog throughout the 1960s.[3]

The 1970s and 1980s witnessed a stream of Christmas releases by artists such as Singing Sammy Lewis, the Gospel Keynotes, and various artists collections from Peacock, Malaco, and New Jersey-based Glori Records. Even Chicago’s venerable First Church of Deliverance choir contributed an EP of Christmas cheer. Among the Clark Sisters’ early LPs for the Sound of Gospel label was a Christmas album, New Dimensions of Christmas Carols, although it does not represent their finest work. In 1985, Edwin Hawkins released The Edwin Hawkins Family Christmas for Birthright, a project that featured Richard Smallwood’s “Follow the Star.” This breathtaking piece presaged the majestic beauty of Smallwood’s later compositions, such as “I Love the Lord” and “Total Praise.”

Sadly, the Hawkins album, like so many others mentioned in this essay, remains out of print and was never reissued. Still, each Christmas recording extended the tradition begun by the Elkins Mixed Quartette 81 years ago.