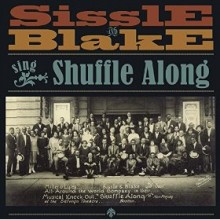 Many of you have no doubt heard about the current Broadway “revival” of the landmark 1921 musical Shuffle Along, choreographed by Savion Glover and starring Audra McDonald (who will be replaced by Rhiannon Giddens starting July 26), with Joshua Henry and Brandon Victor Dixon portraying the famous songwriting team of Sissle & Blake. Subtitled “Or the Making of the Musical Sensation of 1921 and All That Followed,” the show is actually more of a re-imagining than a revival, incorporating many of the original’s famous songs but not following the original book.

This new CD from Harbinger Records, Sissle and Blake Sing Shuffle Along, was released at the end of April to coincide with the opening of the Broadway show, and features “recordings Eubie Blake and Noble Sissle made for Blake’s EBM record label, as well as a newly discovered set of extremely rare acetates of demo recordings by Sissle and Blake for a proposed Shuffle Along of 1950 Broadway show.” Songs are arranged in the original order of the 1921 musical, performed primarily by Sissle (vocals) and accompanied by Blake (piano). But just to be clear, though there are many different cast recordings of Shuffle Along, what’s featured on this CD are the songs as sung by the original composers, recorded decades later.

Indianapolis-born Noble Sissle (1889-1974) and Baltimore native Eubie Blake (1887-1983)—two of the most famous early African-American composers, vaudeville stars and recording artists—began their careers during the ragtime era. Joining Lt. James Reese Europe’s famous 369th U.S. Infantry “Hell Fighters” Band during WWI, they helped to promote an appreciation of Black popular music throughout the U.S. and Europe, especially the new genre known as “jazz.” After the war they experienced a number of successes, but none so great as their landmark musical Shuffle Along. Based on a comedy routine by their vaudeville colleagues Flournoy Miller and Aubrey Lyles, who wrote the book, the musical opened in New York in 1921 with Blake leading the orchestra from the keyboard. Though not the first Black show on Broadway (Bob Cole’s minstrelsy themed A Trip to Coontown and Will Marion Cook’s more progressive Clorindy both debuted in 1898), Shuffle Along became one of the most successful Broadway musicals of the era, drawing audiences with its swinging jazz melodies and “hot rhythms.”

The 24-page booklet accompanying the CD provides an excellent history of Shuffle Along by Richard Carlin and producer Ken Bloom, excerpted from their forthcoming biography of Eubie Blake. But given the level of detail on the composers and the history of the musical, it’s somewhat incomprehensible that only scant information is provided about the actual recordings featured in this compilation.

The earliest tracks are drawn from Shuffle Along of 1950 demos that have never been released. Thanks to the generosity of record collector Peter Shambarger, who discovered these discs twenty years ago, we can now hear the songs in excellent sound (though regrettably the piano is somewhat buried in the background). Most importantly, though, we can hear Sissle’s commentary, updated for the era. For example, on “Bandana Days” he references beboppers, and in “If You’ve Never Been Vamped by a Brownskin” he interjects some comedy in the midst of Blake’s solo. Blake’s masterful rendition of the “Shuffle Along Medley (Entr’actre)” is drawn from an uncredited QFS piano roll (presumably one of those he recorded for QRS in May, 1973). The remaining twelve tracks are culled from LPs issued by Eubie Blake Music, a label founded by the musician in 1971.  The “Shuffle Along Medley” and “Love Will Find a Way” (from this 1971 LP?) are performed by Ivan Harold Browning, who sang first tenor in The Four Harmony Kings (a quartet featured in the 1921 Broadway cast of Shuffle Along), before assuming one of the leads in the show. Original cast member Gertrude Saunders also reprises her most famous song, “Daddy Won’t You Please Come Home” (she recorded this for Okeh in 1921). Ruth Williams joins Sissle on the show’s most enduring hit song, “I’m Just Wild About Harry.” The set concludes with “Fourth of July in Jimtown,” a comedic routine performed by the show’s creators, Flournoy Miller and Aubrey Lyles (presumably from the 1923 Okeh recording).

None of these recordings have been released on CD before, and will certainly provide those interested in early African American musicals, and Sissle and Blake in particular, with additional source material for study. The other great news is that Harbinger (a division of The Musical Theater Project) plans to reissue all of the Eubie Blake Music recordings, as well as the complete demo of Shuffle Along of 1950, in the near future. Let’s hope that liner notes for these planned reissues properly credit the sources.