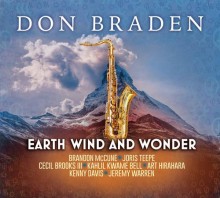 Growing up in Louisville, Kentucky in the 1970s, world-renowned straight ahead jazz saxophonist Don Braden fell in love with the music of Earth, Wind & Fire and Stevie Wonder. According to Braden, “This is the music that first imprinted my teenage brain…and captured my heart.” Now, although this album pays tribute to these great artists and their musical legacy, Earth Wind and Wonder also demonstrates Braden’s versatility and his creativity as a performer and arranger, while re-introducing his audience to the positive messages of strength, love and joy within the music of EWF and Stevie.

Opening with a medium-up swing rendition of “Fantasy,” Braden uses EWF’s original harmony in his introduction, but soon transitions into his own interpretation filled with re-harmonization and rhythmic figures. We are later treated to “The Wonder of You,” where Braden channels the compositional spirit of Stevie Wonder’s music into a smooth and light bossa-funk groove coupled with jazz harmony and a memorable melody.

Performing new arrangements of Earth, Wind & Fire and Stevie Wonder’s notable hits is certainly not an easy task. However, Braden accomplishes this mission with his superb renditions, while staying true to the essence of their artistry. Earth Wind and Wonder is truly an artistic expression that will capture the hearts and minds of its listeners. 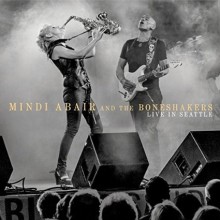 With few exceptions, the conventional wisdom is that you can usually take or leave live albums. I believe I will choose the “take” option with Mindi Abair’s new release Live in Seattle. If you are thinking to yourself, “I have never heard of Mindi Abair,” odds are you actually have. Or you’ve at least heard her, although you may not know it.

Mindi has played saxophone with some of the biggest names in the music industry, including The Backstreet Boys, Bruce Springsteen, Aerosmith, Paul Shaffer, Dave Koz, Richard Elliot and Gerald Albright. She was also going to be the saxophonist on Michael Jackson’s planned tour before his passing—not too shabby for a girl from St. Petersburg, Florida.

Abair grew up in a musical family. Her father Lance Abair is a saxophonist and keyboardist; her grandmother Virginia Rice was an opera singer and piano and voice teacher. She started playing piano at the age of five, and began saxophone at the age of eight. In high school she was a drum major. Mindi received a full scholarship at the University of North Florida but then transferred to Berklee College of Music in Boston and formed her first band.

After graduating from college, Mindi moved to Los Angeles, where she started to play all over town. She played on the street at 3rd Street Promenade in Santa Monica and gained the attention of jazz keyboardist Bobby Lyle. And the rest, as they say, is history. Seven solo studio releases later, Mindi has decided to try her hand at a live album. Despite the potential for live albums to be off-putting to some listeners, Live in Seattle contains a wealth of enjoyable material.

This fourteen track album is full of great grooves and “rock n’ soul” tunes, a collection of feel-good songs for your soul. Not too many artists can make you feel happy one moment and tug at your heart strings the next. Live in Seattle contains 11 original songs, 2 covers and 3 brand new compositions. The personnel on this release are top notch—two standout musicians are guitarist Randy Jacobs (The Boneshakers’ band leader) and vocalist Sweet Pea Atkinson. One highlight from this set is “Bloom, ”a sax-driven stadium rocker from Abair’s third album Life Less Ordinary, featuring the saxophonist’s playing at its soulful best. “Cold Sweat,” featuring Sweet Pea Atkinson on vocals, is a compelling rendering of the James Brown song, the funk of the original morphed into an uptempo blues shuffle. If this one doesn’t make you want to get up off a that thing to dance, you might be dead.

Mindi had the privilege to co-write one of the new cuts for this album, “Make it Happen,” with the great Booker T. Jones. Keyboardist Rodney Lee does a fine job providing B3 organ in Jones’s stead. The record also includes a hard-rockin’ version of George Gershwin’s “Summertime,” propelled by Abair’s saxophone and Jacobs’s distorted guitar—I’m confident that you have never heard this song performed this way.

Overall the combination of rock, soul, funk, and groove jazz makes Live in Seattle a great effort from Mindi Abair and The Boneshakers. Give it a listen, you won’t be sorry.