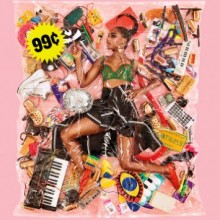 Santigold is mostly known as a fashion forward artist with a singular pop sound. Songs like “L.E.S. Artistes” and “Creator” from her two albums Santigold and Master of My Make-Believe have resonated their way into a remarkable place in contemporary American cultural history. Now a 39-year-old woman, her most recent release, 99c, is an album that not only expresses her singular musical control but also her maturity. She has produced her own take on pop that never sounds forced.

99 Cents begins extremely well with “Can’t Get Enough,” a terrific song that sounds like an elegant take on the pop music of the 1950’s:

The song “Banshee” is another notable track, though it sounds like her older releases. This indicates one of the issues with this album—sometimes it feels like her sound has not progressed and that we’re listening to songs from her older albums. Despite feeling unoriginal, “Banshee” is a good time. “Before the Fire” resonates like great American songs do: it is both weighty and light, and is probably the most interesting of the album’s 12 tracks.

“Outside the War” is another great song that combines rock and pop well. In it, we hear an understanding of the amount of space for lyrical experimentation that this blend can afford a musician being put to great use. “Run the Races” stings.

In an interview with Complex magazine, Santigold said “I set out to make a pop record that incorporates all the things Santigold records always incorporate, which is elements of African music, punk rock, hip-hop and everything that I would want to put into a song but still under the umbrella of a pop song where there’s a chorus you can sing along with. I like when pop is still good music, that’s what I like.” The long history of human artistry is a history of artists attempting artistic freedom: the ability to produce art that expresses “true selves.” There are still debates about the painting Mona Lisa and who it really depicts: either the wife of the man who commissioned Leonardo Da Vinci or a courtesan, suggesting that Da Vinci may have pushed against what he was “supposed” to do in favor of following his own muse. Something similar has happened in music, with pop musicians attempting personal “freedom” through artistic expression, despite the potential constraints that come with record labels and sales figures. Santigold’s effort puts her at the avant-garde of those who genuinely love pop and strive to produce their own take on it.

There’s a notable amount of very serious, almost political, playfulness in Santigold’s album that only she does in the pop music realm. Pop culture is a culture of play and most pop musicians take this to an extreme. But Santigold seems to want to take its playfulness in another direction, drawing her lyrical and musical style much closer to rock.

Santigold’s 99 Cents is a notable album. She combines rock and pop better than any of her peers do, pushing the boundaries of pop music beyond the limits set by radio and the musical performance circuit and into the realm of sincerity and actual personality.