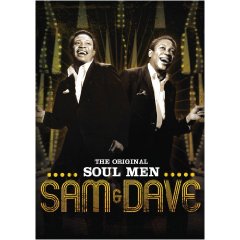 Sam Moore was supposed to have been Sam Cooke’s replacement in the Soul Stirrers, after Cooke made his historic decision to pursue secular pop music. But then Moore saw Jackie Wilson, and everything changed. The Original Soul Men: Sam & Dave is an invaluable visual document that shows the connection between Moore and partner Dave Prater. Featuring seventeen of the duo’s fiery live performances, the DVD is also interspersed with testimonials from Stax/Volt founder Al Bell, Moore himself, bassist Duck Dunn and others, that highlight the connection of soul music to its roots in the black church.

Before we see the duo perform “Soothe Me,” Moore admits that the title was adopted from the gospel song “Save Me, Jesus, Save Me.” Bell confesses one of his marketing maneuvers for “You Don’t Know Like I Know” (which we see performed on the German Beat Beat Beat program) was to pitch it as a “holiday” song to radio DJs the day before Christmas, which worked because of its clear musical connections with the church. The DVD’s bonus features include three live performances labeled “The Roots of Sam & Dave,” which also highlight the pair’s connection to sacred music. In particular, Jackie Verdell and Brother Joe May’s duet on “You’re Gonna Need Him After a While” is, by itself, worth the price of the entire DVD.

Along with Otis Redding, Sam & Dave were Stax/Volt’s standard-bearers for soul straight from the pulpit. Soul Men even features a performance of “I Take What I Want” by the duo-in matching fire truck-red suits, no less-on Redding’s own short-lived TV show called “The Beat.” Later in the film, Moore confesses to a bit of friendly competitive rivalry between the duo and Redding, based around which act could produce the most incendiary live performance. The performance of the classic “Hold On, I’m Coming” featured in the film proves beyond any doubt that the duo was able to match Redding’s own flair for the dramatic. Taking place in front of a ravenous crowd at London’s Hammersmith Odeon in 1967, the intense, constantly zooming and cutting cinema-verité style photography of the performance directly recalls the manner in which D. A. Pennebaker’s crew captured Redding that same year, performing “I’ve Been Loving You Too Long” at the Monterey Pop Festival. Moore and Prater allow the Stax/Volt band to vamp for a few minutes at the end of the performance, as they dance exuberantly and allow crowd members to touch not only the hems of their garments, but also their hands.

The film pays brief homage to the duo’s backing musicians as well, an important inclusion for those who think that the MGs were the sole soul providers of the music behind the singing. Moore recalls wanting a band that could “dance and play at the same time,” which led to the formation of what he calls a “22 piece orchestra.” That group is as much a part of this film as Sam & Dave themselves, injecting as much refined energy on risers in the background as the two men testifying up front. The film includes a performance of the band alone performing “Roadrunner,” as well as a fun bonus track of the band playing a brief version of “Secret Agent Man.”

Much of the rest of the film is evidence of the popular music atmosphere during the late 1960s and early ‘70s, when the music was proliferating wildly, and live producers were inventing new ways to present it using available technology. From Danish television, the performances of “You Got It Made” and “I Don’t Need Nobody” feature Sam & Dave singing in the center of the screen, framed on either side by two women go-go dancing in front of polished metal backdrops, creating a dated, vaguely psychedelic tableau. The video for “You Got Me Hummin'” sees the duo in impossibly bright, nearly glowing yellow suits, backed by their band in variations of yellow and blue suits on risers behind them. Finally, the filmed promotional video for “Baby Don’t Stop Now” is evidence that, in 1970, most people still didn’t know what to do with the music video medium. The clip mostly shows Sam & Dave, dressed to the nines in fur and leather, walking around what appears to be London, peering in shop windows and trying their best not to look at the camera.

According to Bell, Sam & Dave playing on the Ed Sullivan Show “was like manna from heaven.” They certainly made the most of their appearance, and their medley of “Soul Sister Brown Sugar” and “Lucky Ol’ Sun” is the highlight of the film. Sam’s vocal on the Ray Charles-penned “Sun” is his best performance here, but that’s only the start. “Sun” expands dramatically, picking up its pace and threatening to collapse from its unreleased energy, and then segues seamlessly back into “Soul Sister,” which ends the set. The music echoes cavernously throughout Sullivan’s studio, but that only gives the performance an increased sense of bigness to match the of-the-era sense of liveness.

Later, two other high-profile performances show the group’s sense of humor and ability to stretch beyond rhythm-based soul music. Burt Bacharach jokes about shooting the pair with tranquilizer darts to calm them down, and then asks them to sing his “Make it Easy on Yourself” with, as Bacharach notes, “a whole lot of strings attached.” On the Mike Douglas Show, Douglas comments that “it wears me out just watching you guys,” and then they put him on the spot, giving him a vocal solo on “Lucky Ol’ Sun.” Needless to say, this bit is more of an enjoyable historical curio than a crucial performance.

The video’s main point of historical significance is mentioned in a brief title card after the video fades out, which tells us that, “After shooting this promotional video, Sam & Dave broke up the act.” The film picks back up in 1980, when the duo had been persuaded to appear on Saturday Night Live. Their performance of “Soul Man” showed that they were still more than capable, 13 years after the song’s original release, of investing it with their uniquely passionate approach, even when their backing band breaks down mid-song into something that sounds less like soul and more like Billy Preston-style piano-driven gospel funk. It’s fitting, of course, that performances of “Soul Man” bookend the film. Watching the two chapters back-to-back on the DVD, especially with the knowledge that Prater passed away in 1988 (in the film, his widow offers a few bits of insight about the duo), is a poignant reminder that, though they were only around for a brief time, Sam & Dave’s musical and performative legacy is one that will be remembered and re-visited for years to come.