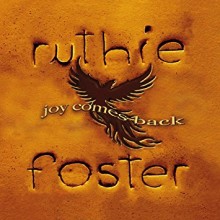 After eight albums recorded on Blue Corn Music, Ruthie Foster has released Joy Comes Back, a truly heartwarming collection of gospel, soulful rock, and blues songs. Joining Foster on this album are talented instrumentalists Derek Trucks of Tedeschi Trucks Band, Willie Weeks, Joe Vitale, and Warren Hood. The inspiration for this album draws from Foster’s deep emotional struggle of claiming custody of her five-year old daughter and transforming her family life for the better.

Foster worked with Austin producer Daniel Barrett to record ten tracks of mostly reimagined cover songs. The album opens with two songs presenting Foster as a sensitive, yet strong and relatable woman—the smooth and easy “What Are You Listening To?” followed by the much harder rock song “Working Woman.” On the gospel title track, “Joy Comes Back,” Trucks complements Foster’s richly spirited vocals with masterful electric slide guitar.

The core of Foster’s music, particularly on her only original song “Open Sky,” reflect the strength, insight, and even uncertainty about love that arises when prolonged emotional battery comes to an end. The chorus of “Good Sailor” is especially expressive of her experience:

Other eclectic, yet surprisingly fitting songs covered on this album include “War Pigs” by Black Sabbath, “Loving You Is Sweeter Than Ever” written by Stevie Wonder and Ivy Jo Hunter, and “Richland Woman Blues” by Mississippi John Hurt. Joy Comes Back concludes with two emotionally powerful songs, “Abraham” and “Forgiven.” For Foster, music is therapeutic and gives her the strength to overcome challenges in her life, to embrace her family, and to celebrate happiness in both its hidden and exposed forms.

Title: The Truth According to Ruthie Foster

Following up 2007’s The Phenomenal Ruthie Foster, Ruthie Foster once again showcases her roots-based blend of blues, soul, gospel, and folk rock.  Similar to fellow blues-rocker Danielia Cotton, Texas-born Foster cut her musical teeth singing gospel in church, learning rock songs, and listening to country radio with her grandfather.  Both reflect the fusion of their childhood experiences, though Foster swings to folk influences more than the rock and country that pervade Cotton’s music.

Drawing on those gospel roots, Foster certainly does step up to testify on The Truth; all eleven songs weave a sort of sermon out of hard times, hope, and Foster’s gritty, powerful voice.  The song selection covers equal parts covers and original tracks.  Foster’s originals slant towards the positive side of life, emphasizing love, perseverance, and gratitude.  “Stone Love” is a strong opening track, with a funky electric blues groove and anthemic lyrics such as “You see your worries, they’ll be alright / Just look around you, see that love is winning the fight.”  “Joy on the Other Side” has the acoustic sound of Delta blues or old-time string bands, with the celebratory verve of gospel.  Foster’s central message comes in the aptly-named “Truth,” in which she proclaims “Truth is right where you are.”

While Foster’s own songwriting voice is powerful, several of her covers stand out as the stronger tracks, allowing Foster’s voice to really shine.  Not coincidentally, these are the songs dealing with downward turns of fortune, whether material or spiritual, and Foster brings out the raw catharsis of blues in them.  “Nickel and a Nail” sounds like it emerged from a dark, smokey blues club on a summer night, with Foster’s voice taking on a growly and world-weary tone reminiscent of Janis Joplin.  “When It Don’t Come Easy” is simultaneously wistful, exhausted, hopeful, and comforting in its message of strength and love in hard times.

In spite of these stronger tracks, the album as a whole is somewhat uneven.  The light, reggae-styled “I Really Love You” feels out of place both in style and emotional intensity, even in the stylistically diverse selections on this album.  “(You Keep Me) Hangin’ On,” “Love in the Middle,” and “Thanks for the Joy,” while more stylistically consistent with the rest of the album, are also more forgettable.  Overall, one has to listen through The Truth According to Ruthie Foster quite a few times before any of the tracks start to stand out from each other.  While this kind of slow burn isn’t always a bad thing, Foster’s voice is phenomenal and it’s a shame that the album as a whole doesn’t showcase it to its fullest.

Following is a mini-documentary featuring Ruthie Foster at the Blue Rock studios in Wimberly, Texas: 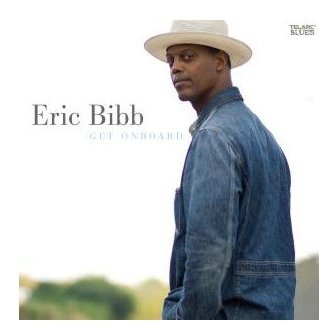 Although he is frequently classified as a blues singer/songwriter, Eric Bibb draws most heavily from the music of black churches on his latest release, Get Onboard. Whereas only one of its songs is cast in a standard twelve-bar blues form, the album is permeated by the sounds of gospel and of spirituals. Many of the songs’ lyrics are of religious or spiritual themes, although the music on Get Onboard ranges in character from the boldly defiant to the quirky and humorous.

To my ears, Get Onboard seems uneven; a certain flatness or lack of energy characterizes several of its songs, making them unable to sustain repeated hearings. This flatness is most apparent on the album’s heavier tracks—especially its opener, “Spirit I Am.” Replete with several backing vocalists, this song aspires to convey the impression of a congregation en masse as it repeatedly intones the phrase, “I live for the Spirit I am.” But the voices blend a little too smoothly for my taste; greater distinction among the backing vocalists would have been more powerful. Additionally, Bibb’s delivery of the song’s verses is not sufficiently emotional.

Bibb shines more on songs depicting humility and supplication, as well as on the album’s more humorous numbers. “If Our Hearts Ain’t In It” (which features Bonnie Raitt on slide guitar) describes feelings of religious ambivalence: one can go through the motions of religion—“Go to church seven days a week / Read the Bible three hours a day”—without actually experiencing any religious fervor of one’s own—“If our hearts ain’t in it / Ain’t nothing much is gonna change.” Bibb’s voice sounds weak and wavering in this song, fitting the mood of its lyrics; the wandering quality of the harmonies also helps the ambivalence.

“Conversation,” a duet with Ruthie Foster, is cute. The only twelve-bar blues song on the album, it offers a humorous musical setting of a conversation between a couple who don’t spend enough time together:

The somewhat jaunty and unpredictable musical accompaniment lends a touch of irony to the ostensible love duet.

Despite its occasional winners, Get Onboard suffers greatly from the aforementioned lack of zeal, and I cannot give it my fullest recommendation. I would, nevertheless, like to note how well produced the album is; many of its songs feature large instrumental ensembles, but their sound is never homogenized and the individual instruments can be heard distinctly.

Promotional video showing the making of Get Onboard, courtesy of Telarc: