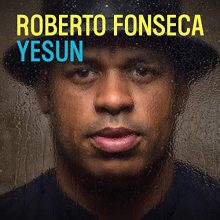 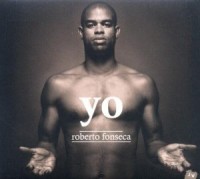 Dedicated to innovation in the jazz idiom even in his cover art, Cuban born pianist Roberto Fonseca reminds us that, “for musicians it is important to take many risks in many ways”. Growth is a necessary component of self-actualization and one cannot grow without taking on challenge. Recorded in Paris in one week, Fonseca’s Yo exemplifies a musician venturing beyond the margins of jazz by fusing Afro-acoustic instrumentation with shades of electronic music and spoken word.

In each of his albums, Fonseca seems to be in a state of experimental reformation.  This latest record takes his audience on yet another departure from his roles alongside Ibrahim Ferrer, Omara Portuondo and in the Buena Vista Social Club. Yo inspires us to seek inspiration in humanity and assert our connections to others through self-reflection.  Like any thorough Caribbeanist with Cuban roots, Fonseca’s fascination with African antecedents continues to serve him well. In this new album, Fonseca and his Cuban counterparts combine their traditional Afro Cuban jazz rhythm section (percussionist Joel Hierrezuelo, drummer Ramsés Rodríguez and double bassist Felipe Cabrera) with superior talents from the African continent.  Malian female vocal star Fatoumata Diawara is stunning on the track “Bibisa.”  Installations of Sekou Kouyate on kora, Baba Sissoko (percussion), bassist Etienne M’Bappe, and guitarist Munir Hossni provide veteran poise on the album as Fonseca leads his ensemble in musical curiosity and energy.  Not to be overlooked is the appearance of the great Senegalese vocalist Assane Mboup as lead in “Quien Soy Yo.”  In this piece the use of the Brazilian cavaquinho is playful and the vocal timbre and harmonies wax Cuban rumba and Uruguayan murga.  One could interpret the mix of these elements as a bridge, linking musical elements from the Americas to Africa.

Fonseca’s minimalist take on improvisation is refreshing and a welcome change from the usual note-heavy montunos that we are accustomed to hearing from Afro-Cuban piano players.  His background in percussion compliments the harmonic breadth of the piano and his gift for being able to develop elegant melodies from a single rhythmic and harmonic cell is quite fascinating.

Roberto Fonseca is an eclectic, multicultural pianist and this listener is still stumped as to how to categorize his music: Afro-Pop? Latin Jazz? Acid-Afro-Cuban Jazz? Fonseca’s style is one that has never been easy to describe, but in this new album one gets sense that he is fearless in his search to express inner emotion using the vast endowments of his diverse musical universe.

For more on Roberto Fonseca’s Yo take a look at this one minute interview by Montuno Producciones y Eventos:

Fonseca is touring the U.S. this fall and will be making an appearance at the Lotus World Music & Arts Festival in Bloomington, Indiana.