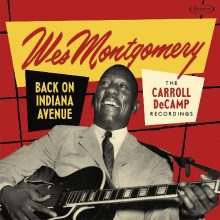 Resonance Records has made yet another miraculous discovery, extending its documentation of legendary jazz guitarist Wes Montgomery’s early career and sharing the results with us.  I had the great pleasure of contributing reviews of this company’s two earlier releases that set the stage for the wonderful performances captured on this new release, One Night in Indy and In the Beginning.  For those readers with ties to Indiana, it is worth noting that this release was prepared with assistance of a number of notable artists and scholars, among them David Baker, Duncan Schiedt, Jamey Aebersold, Royce Campbell, and John Edward Hasse.  They, along with others, attempted to identify the musicians who accompanied Wes.  Some possibilities are also identified  in the photographs included in the comprehensive notes that accompany this release. Visible there are Larry Ridley, Melvin Rhyne, David Baker, David Young, Pookie Johnson, Buddy and Monk Montgomery, Carroll DeCamp, and Hal Grant.  But despite their collective wisdom, specific personnel cannot be conclusively linked to each recorded performance. But no matter, the results are consistently musical, reflecting creativity at the highest possible level.  Sound quality proves the considerable care taken in preparing these invaluable recordings. Both the solos and collective interplay among the musicians are clearly captured, bringing the listener right into the spirit of each performance. END_OF_DOCUMENT_TOKEN_TO_BE_REPLACED