Ulysses Owens is one of the most sought after jazz drummers around today, having worked alongside living legends such as Wynton Marsalis, Maceo Parker, Kurt Elling and Christian McBride, with whom he won his first Grammy Award. On top of his outstanding work as a side man, Owens is also making great strides as a band leader, with two studio albums, as well as positive influences in the jazz community through his work as an educator. Now, with the release of his third album, Songs of Freedom, Owens provides his commentary on the American political climate through the songbooks of three female icons of the turbulent 1960s: Nina Simone, Abbey Lincoln, and Joni Mitchell. END_OF_DOCUMENT_TOKEN_TO_BE_REPLACED 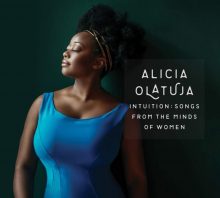 The newest release from acclaimed vocalist, composer, and arranger Alicia Olatuja celebrates noted female composers in a collection of reinterpretations entitled Intuition: Songs from the Minds of Women. Olatuja, who showcased her vocal talent for millions during the second inauguration ceremony for President Barack Obama, picked songs for Intuition that encompass a wide variety of themes, genres, and perspectives in an effort to celebrate the diversity of women’s musical expression. END_OF_DOCUMENT_TOKEN_TO_BE_REPLACED