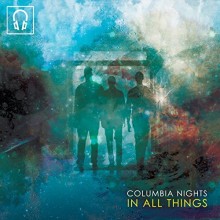 Title: In All Things

Washington, D.C. has always had a vibrant music scene, especially given its “Chocolate City” status. This scene, however, has typically been dominated by go-go music and at times, hardcore punk. Intent on breaking new ground, the D.C. band Columbia Nights is a “soultronic production group” comprised of John E. Daise, Jason Edwards and Hayling Price. The trio combines their numerous soul, funk, and R&B influences with their love of electronic music, and the result is harmonious to say the least. In All Things is their first full length album, following 2012’s EP Dawn | Dusk. There is definitely a sense of growth between the EP and this album.  The production is more lush on In All Things, and takes the listener further inside the sonic worlds that Columbia Nights constructs.

There are a number of interesting collaborators featured on the album—such as Diggs Duke, violinist Vaughan Octavia, and singer B.Jamelle, among others—who seek to highlight some of the group’s musical influences. The band’s collaboration with Aaron Abernathy on “Coming Home” is particularly compelling, and sounds like it could be a track off of D’Angelo’s album Black Messiah (2015).  The instrumentation on songs like “Glide” and “Cerulean” are also particularly impressive.

It is not an overstatement to describe In All Things as cosmic, both in scope and in sound.  The album moves seamlessly from groove to groove and vibe to vibe, offering a wide variety of sounds but never sounding at odds with itself. In All Things is a journey from start to finish, and a well-constructed one at that.  The album is a great first effort from Columbia Nights, who are representing the D.C. soul scene well.