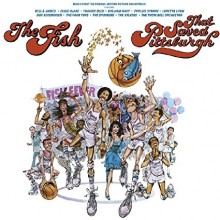 Title: The Fish That Saved Pittsburgh

Collectors of 1970s soundtrack albums will be interested in this reissue from Real Gone Music. The Fish That Saved Pittsburgh was a “big screen sports fantasy” based on the typical rags to riches theme of a scrappy backetball team’s road to the finals. Released in 1979, the film was co-produced by Gary Stromberg (Car Wash), whose goal was to score another music centric hit. But despite the inclusion of basketball greats Julius Erving, Meadowlark Lemon, and Kareem Abdul-Jabaar, plus actors the likes of Flip Wilson, Debbie Allen and Dee Dee Bridgewater (the “jeerleaders”), Stockard Channing, Jonathan Winters, Joe Seneca, and M. Emmet Walsh, this Pittsburgh centric sports movie failed at the box office, and the original sound track album likewise never cracked the charts. Following the VHS release in the mid-1980s, however, both the film and soundtrack gained a cult following, attracting the attention of the hip hop generation. In fact, Questlove plays the title track every time a Pittsburgh native appears on Jimmy Falon’s Tonight Show. Appreciation for the film increased following the 2010 DVD release, and is now considered by diehard fans to be the greatest basketball movie of all time.

Interest in the soundtrack can easily be explained—it was composed, arranged, produced, and conducted by the legendary Thom Bell and recorded by Joe Tarsia and his crew at Sigma Sound Studios in Philadelphia. This was Bell’s first opportunity to score a film, and he brought in all of the industry heavyweights: The Sylvers (“Mighty Mighty Pisces”), The Spinners (“(Do It, Do It), No One Does It Better”), The Four Tops (“Chance of a Lifetime”), and even Eubie Blake, who accompanies Bell on “Ragtime.” The primary accompaniment is credited to the Thom Bell Orchestra (mostly PIR session musicians), featuring Bell on keyboards, Bob Babbitt (Funk Brothers) on bass, Anthony Bell and Bobby Eli on guitar, Larry Washington, Edward Shea and Michael Pultro on percussion, and Charles Collins on drums, plus Don Renaldo’s Strings and Horns.

Released at the peak of the disco area, the music is funky and dance oriented, but also draws upon Bell’s trademark Philly soul and is liberally sprinkled with references from earlier Blaxploitation-era soundtracks, most notably Shaft. Other notable songs include “Magic Mona” (Phyllis Hyman), “Moses Theme” (Frankie Bleu), “Follow Every Dream” (William “Poogie” Hart), and the opening track “A Theme for L.A.’s Team” featuring trumpeter Doc Severinsen in his prime.

This is the first CD release of The Fish That Saved Pittsburgh, and Real Gone’s expanded edition includes three bonus tracks culled from limited edition singles, along with liner notes by Joe Marchese in a fully illustrated booklet.