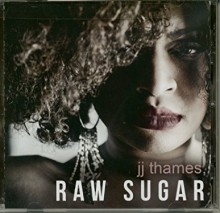 Detroit native JJ Thames trained in jazz and classical music from the age of 9 and added blues to her repertoire by the time she was 18. Since then, she has been entrenched in a number of genres, including soul, rockabilly, reggae, roots, and ska. Her sophomore album, Raw Sugar, is a collaboration with Mississippi guitarist Eddie Cotton, who co-wrote twelve of the thirteen tracks and is the lead guitarist on the album.

In an attempt to jumpstart her musical career, Thames moved down to Jackson, Mississippi and performed with “Chitlin’ Circuit” superstars such as Marvin Sease. This Southern influence is present on “Hattie Pearl,” as Thames sings about greens, fish and grits, and sipping tea on the back porch. The music is also irresistible—a mix of funk and blues with a twinge of gospel that resounds with horns, a killer keyboard solo, and Thames’ soulful singing complete with growls and shouts.

Thames’ sound harkens back to a different era, embodying the power and vocal quality of legendary ‘60s and ‘70s soul women such as Aretha Franklin and Gladys Knight on tracks like “I’m Leavin’” and “Leftovers.” The accompaniment effortlessly evokes this time period as well, from the varied instrumentation to the tight arrangements that leave no room for imperfection.

As the album progresses, Thames explores the other genres that she has perfected over the years. “Woman Scorned” takes a modern rock turn, as Thames sings with a rollicking electric guitar and heavy dose of drums. “Hold Me” is a passionate, lyrical ballad that slows things down and is backed by harmonizing vocals. “Don’t Feel Nothing” is a rockabilly jam full of twanging guitar that’s perfect for dancing. “Raw Sugar” is straight ahead blues, which Thames growls, croons, and moans directly from the soul while Cotton adds an incredible blues guitar solo.

Legendary R&B singer Dorothy Moore has referred to JJ Thames as “the future of the blues.” On Raw Sugar, Thames certainly shows she is an artist who is determined to make her mark. Her voice is strong and confident, whether rebuking a man who has treated her wrong or expressing emotional vulnerability in a ballad. Thames channels many African American musical genres and influences, but remains distinctively herself—a powerful singer from Detroit who is living in Mississippi and securing her own place in the music world.