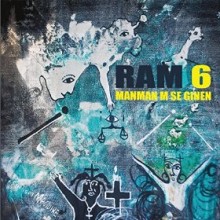 In the Haitian musical style rasin, religious rhythms are blended with secular rhythms drawn from rock or pop. In the 1980’s, several Haitian musicians decided to play Haitian music true to what they believed were the island’s cultural roots—Vodou religion—and found a kind of bohemian success doing it.

Their movement was founded in both music and culture; rasin musicians would not only play Vodou music, but also dress and even walk in a manner closer to Haitian popular culture. In order to understand Vodou rhythms, they visited Haiti’s many Vodou Lakou temples, such as Lakou Badjo in the Artibonite, a region in Haiti known for its rice and legumes. They wore dreads but as cheve simbi, which translates to “simbi hair”—to match that of Kongo Simbi spirits transplanted to Haiti in Vodou mythology. These musicians played at very small venues, including the painter Jean Rene Jerome’s house. They mixed the rhythms that they found through their research with rhythms that they had personal affinities for, drawing from rock and other pop music styles. The very first rasin group was Foula, while the most internationally recognized today is likely Boukman Experyans. They were not the first Haitians to produce commercial music rooted in Vodou rhythms, however.  In Haiti it is generally agreed that the true founder of Rasin music was Antalcidas Murat, who was a member of the group Super Jazz Des Jeunes. Like RAM, Jazz des Jeunes blended popular sounds of its day with Vodou rhythms, though the product was then called “folklore.”

With Manman m Se Ginen, RAM has released a wonderful album of 12 songs that illustrate the continued livelihood of rasin. What is perhaps this album’s defining characteristic is its copious rhythmic blending. These rhythmic layers are exactly what rasin music is all about. The album begins on a both strong and intense note with “Papa Loko,” based upon a rara rhythm and a short segment, almost a snippet, of the lyrics of the Vodou song “Papa Loko” as the basis of the song’s lyrics. Papa Loko is a Taino god, the founder of all, who made his way into the Vodou pantheon of gods. This kind of borrowing continues on the song “Jije’m Byen,” a reinterpretation of a song made famous by the great singer Coupe Cloue. In this case, the voice of Cloue, a vagabond male, is replaced by Lunise Morse, a Haitian woman with a soulful voice. Morse is joined by a rough-sounding choir singing along with heavily-processed melodic guitar in counterpoint.

“Tout Pitit” and “Kolibri Anko” are enjoyable listens though, like the other songs on this album, may not engage a listener enough who is well versed in contemporary musical styles.  If it were not for the synthesizers in the song’s intro, “Kolibri Met Bwa” would be the album’s standout track. The rhythm engages a listener and the medley of instruments is both rich sounding and precise in communicating beauty and urgency. “Ogou O” is a fascinating listen, about a transplanted Yoruba god of war who is now a deity in Haitian Vodou. Perhaps it is the effect of RAM’s having fought long and hard in Haitian politics since the 1990’s that makes them sing about Ogou in such a melancholy style. “Mon Konpe Gede” is the album’s best song by far. Gede is a cultural event in Haiti and a Vodou celebration of the dead and their spirits, and “Mon Konpe Gede” is particularly well-orchestrated.

Perhaps it is because RAM is now a legendary music group in Haiti, but much of the complexity in these songs is cultural and to be explained, rather than operating under the assumption that music must be felt. It often feels like RAM is interested in producing symphonic music that requires listeners be attuned to subtle nuance as opposed to radio music made to resonate itself into popularity. Ultimately, however, that’s fine as Manman m Se Ginen is an enjoyable listen with great instrumentals and a great female singer.