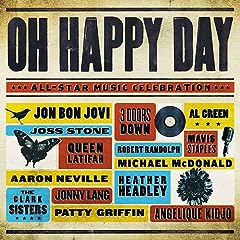 In 1975, performer/scholar Pearl Williams-Jones wrote an article entitled “Afro-American Gospel Music: A Crystallization of the Black Aesthetic,” where she illustrated how gospel music represents the totality of black aesthetic expressions.  Ultimately, her interpretation of the genre not only presented gospel music as a religious art form, but also as a vehicle for bridging the gap between sacred and secular practices in black music.  Oh Happy Day: An All-Star Music Celebration, a new release by EMI Gospel, is a contemporary manifestation of Williams-Jones’ notion of gospel music, as it highlights duets between religious and mainstream music artists: Johnny Lang is paired with the Fisk Jubilee Singers, Robert Randolph with the Clark Sisters, Al Green with Heather Headley, and 3 Doors Down with the Soul Children of Chicago. This CD is a tribute to gospel music that is long overdue, as the genre has functioned as a breeding ground for many of the mainstream music industry’s top artists from Sister Rosetta Tharpe to Curtis Mayfield to Fantasia.  In fact, gospel music has constantly shaped the performance practices and, essentially, the sound of American popular music.

Some of the highlighted duets– such as rocker Jon Bon Jovi with The Washington Youth Choir as well as R&B diva Mavis Staples with Patty Griffin– are overly ambitious and do not necessarily capture the gospel feel (a qualitative performance character), or are unevenly matched vocally.  Nevertheless, there are several jewels on this project such as the rendition of the Impressions 1965 single, “People Get Ready” by the Reverend Al Green and Heather Headley.  Green and Headley’s extended vocal range and elongated phrasings are superbly complimentary.  In addition, their ability to pace their individual ad libs creates mature vocal placement, which keeps them from over-singing and over-shadowing each other.  This track is a good source for novice singers who are searching for an example of how to execute soulful music with patience.

“Oh Happy Day,” featuring Queen Latifah with the Jubilation Choir, represents another notable duet on this project. Queen Latifah’s smooth and warm vocals parallel the rounded and legato phrasing of the Jubilation Choir.  In addition, the instrumental accompaniment on this track illustrates a quintessential example of sacred/secular fluidity in black music.  The Earth, Wind & Fire styled horn riffs, guitar lines incorporating bluesy and churchy vocabulary (if there is a difference), and vamp reminiscent of Sunday morning worship services, all merge to form a distinct sound that resonates within the traditional black church as well as the broader mainstream community that appreciates soul music.

“I Believe” presents the soulful vocals of Johnny Lang and the Fisk Jubilee Singers.  This song paints a picture of a southern-based gritty, communal, hand clapping and foot stomping church deep in the back woods where all the saints are on one accord expressing their commitment to faith in God’s word.   Lang’s raspy vocals create the feel of the shouts and squalls of the black preacher, while the Fisk Jubilee Singers’ background harmonies and rhythmic execution reflect those in the “amen” corner whose excitement for the gospel spreads throughout the congregation (and in this case, the listener), prompting others to sing along with similar conviction.  In addition, Lang’s guitar playing, grounded in the blues tradition, meshes well with the down home ambiance of the track.

Following is EMI’s promo video which demonstrates the widespread appeal of the project:

These tracks, along with others on the CD, reflect an ongoing tradition in black music where sacred and secular practices co-exist.  They also illustrate the fact that gospel music transcends boundaries of race, gender and generation.   More importantly, Oh Happy Day: An All-Star Music Celebration presents timeless songs that have assisted in developing and sustaining the beliefs of people throughout the world.  It is a must have for those who desire to revisit the more traditional gospel music repertoire in a unique and contemporary way.