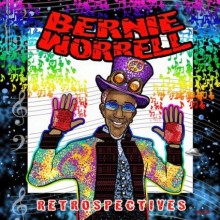 Keyboardist Bernie Worrell passed away on June 24, and his final album, Retrospectives, is a reminder of the legendary musician’s claim to fame as an ever-fresh and funky player.  As keyboardist for groups like Parliament-Funkadelic, Bootsy Collins’s Rubber Band, Talking Heads and the countless other projects that Worrell has participated in over the course of his storied career, he developed a unique and ever-innovative style of playing and composing. In addition to acoustic pianos, Hammond B3s, Clavichords, MOOGs and Melodicas, Worrell is reported to have been the second musician to acquire an RMI (Stevie Wonder being the first to get the Rocky Mountain Instruments Electric Piano). It is doubtless true, however, that his alternatingly spacey and funky sounds set the tone for keyboardists who would employ these instruments from the 1970s through the present.

On Retrospectives, Worrell uses a variety of keyboard instruments to create rich musical tapestries—the record features only Worrell and two drummers, Donald Sturge and Anthony McKenzie II, but Worrell’s multitracked use of his veritable arsenal of keys lends the record a  feel that is nearly orchestral at times.  Even at his advanced age, Worrell’s playing was still sharp when recording these tracks—his funky Clavinet rhythms interweave with melodic synthesizers and richly textured organ sounds on “Joyful Process” (even quoting “Jesus Loves Me” on the tune’s introduction).  Ever true to form, Worrell takes listeners “out there” on Retrospectives, too, bringing in the signature phased-out synth lines that were a trademark of his work in P-Funk’s catalog, taking it far out over steady piano-based grooves.  Most of the record continues in this fashion, an ever-evolving collection of musical textures, grooves, and melodies.  This is music to be slowly and gradually absorbed, preferably through a pair of high-quality headphones—my tinnitus acted up a bit on a few songs simply due to the incredible pitch range that Worrell employed on several tracks. This record makes it clear that Worrell didn’t lose his ability to be sonically and musically challenging with age.

While we may have lost a legend this month, Worrell’s musical legacy, as reflected on Retrospectives, is a rich and diverse one. This album is a wonderful way to cap off a truly remarkable career.