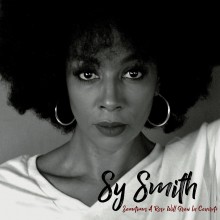 Title: Sometimes a Rose Will Grow in Concrete

Long hailed as the hardest working artist in underground soul, Sy Smith’s fifth album, Sometimes a Rose Will Grow in Concrete, proves once again she is a force to be reckoned with in both the underground and outer-ground music scene. This release is the first album completely written and produced by this multitalented musician, featuring her slick synth bass playing and lithe piano keying along with her incomparable soprano voice and signature vocal arrangements.

Smith’s voice shines through on this album, as she employs various techniques that she is known for and some she seems to honor straight out of 1990s R&B. The title song, “Sometimes a Rose will Grow in Concrete,” teases us with a small sample of her amazing whistle register, bringing it out at the end of the song as a parting gift. Lyrically, this song speaks to the current time, as its inclusion of lyrics such as “Sometimes we get no answers but still the questions will remain…sometimes a rose will grow in concrete, sometimes a caged bird will sing” reflects an activist tone regarding American society. Carrying a strong pen, Smith reveals victories won and battles still being fought as she provides a powerful, if haunting, ode to people who come through the harshest of trials and still bloom as beautifully as roses.

Smith’s continuing penchant for go-go is present in this album with the song, “Now and Later.” The funk-inspired beat interspersed with a cool rhythm-and-blues sound reflects back to Smith’s genesis in DC with her former go-go band “In Tyme.”  “Camelot,” one of the smoothest contemporary R&B ballads, reinvigorates that 1990s Janet Jackson-esque sound, complete with multiple background vocals, string instrumentals and long-winded notes held and released over and again in differing registers.

Providing us with never-ending, smooth stylings that both echo yesterday’s R&B and set the standards for contemporary soul, Sy Smith’s Sometimes a Rose Will Grow in Concrete proves that Smith herself is that enduring rose whose presence grows sweeter and stronger with each new release.