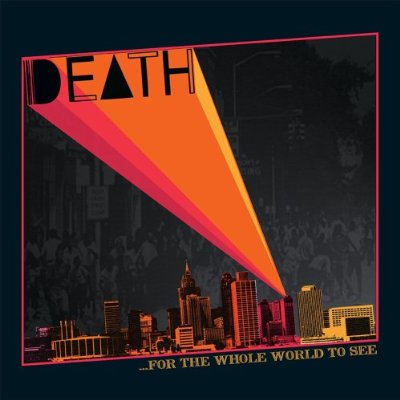 Title: For the Whole World to See

Let me be your harbinger of Death. If you’re a rock-n-roll victim, don’t worry, you’ll enjoy this particular encounter. Formed in 1973 by David, Bobby, and Dannis Hackney, Death was a Detroit-based band and has been hailed in other recent reviews as the “missing link” of punk. Although they initially started playing soul and funk, the Hackney brothers soon became enamored with Black Sabbath, Alice Cooper, MC5, and The Stooges. The end result was a melding of heavy metal, funk, and proto-punk that bridges the black rock gap between Jimi Hendrix and the relatively late formations of Living Colour and other Black Rock Coalition groups in the early 1980s.

I must admit that I was unaware of Death’s existence until this rather unimposing-looking CD crossed my desk as a potential review candidate for Black Grooves. I popped “For the Whole World to See” into my car stereo system on the way home and immediately fell in love with the growling bass and completely unstable vocal style, which shifts from snarls and shouts to the half-swallowed in-the-back-of-your-throat punk sound favored by the Ramones. Even better, the CD has one of the qualities I value the most in my punk-a raw creative energy driven by the need to create an entirely new sound and not by the pressure to cater to a mainstream audience.

Unfortunately, there’s nothing sadder than falling in love with a band that’s been gone for nearly thirty-five years. Aside from their 1976 single (which is now an extraordinarily rare collectors’ item and probably sells for more money than Death made off the entire original release), For the Whole World to See is all there is. This particular CD is comprised of a demo tape that was recorded from October through December of 1974. To put this date in perspective, the Ramones formed in early 1974, sonically shocked their first club audience at CBGB’s on August 16th, and recorded their debut album for Sire Records in February 1976. Although it took thirty-five years to rescue the demo tape from Bobby Hackney’s attic, For the Whole World to See is at long last available and has become a strong contender for the title of earliest punk recording.

Another thing that makes Death absolutely amazing is that the band was totally removed from the support of the New York proto-punk scene of the mid-1970s. Although there were a few other Detroit groups flirting with the emerging punk aesthetic in the late ’60s and early ’70s, such as MC5, The Stooges, and The Dogs, Death was trying to make its home among the clubs and parties of Detroit’s predominantly African-American east side, where funk and soul were king. Although there are definitely funk elements in the mix, which make Death sound more at home with the punk bands of the ’80s and ’90s than with their contemporaries, the band’s use of screeched vocals, power chords, driving rock rhythms, and even their nihilistic name received criticisms from black audiences. Ultimately, the band fell apart after the release of their single and reformed some time later as the reggae band Lambsbread.

The CD starts with “Keep on Knocking,” the B side for “Politicians in My Eyes” on Death’s 1976 single. The song opens with a string of power chords isolated on the right channel before kicking into full stereo and a rollicking guitar sound on a par with Slash’s solo from the end of “Paradise City.” “Rock-n-Roll” adopts a heavier, grittier bass guitar sound, and a goofy shouted falsetto in the vocals that almost makes the song seem like punk parody than the real deal (obviously not possible, since this is proto-punk and there wasn’t really anything to parody yet). Bobby Hackney’s fantastic bass sound continues to resurface on “You’re a Prisoner,” which drops the falsetto in favor of some extreme vocal reverb, as well as “Where Do We Go from Here?” and “Politicians in My Eyes.” Both of these latter songs have a funkier flavor to them. Some heavy-hand drumming drags down the bridge sections in “Politicians,” although it’s hard to tell whether this was done intentionally to downshift into the slower instrumental section or if there was some serious disagreement over the tempo among the band members. “Freakin’ Out” is quintessential early punk-fast, simple, two or three chords, neurotic lyrics, and lots of fun to crank-up on your stereo.

I personally don’t have enough patience to be a fan of “Let the World Turn.” The song opens with widely spaced, almost intermittent, guitar chords strummed beneath a languidly flowing vocal line with plenty of reverb. The song gradually picks up a beat and a little bit of speed and then suddenly whiplashes into a great punk-style chorus followed by a rather banal drum solo. Just when you think the song is over, it returns to the syrupy slow opening and then gives you one more blast of the chorus before falling dead in the middle of a guitar riff. Although somewhat interesting, and you definitely have to admire Death’s willingness to experiment, I have to fight the urge to take a stabbing lunge at the track forward button every time this song rolls around.

If you’re into early punk and metal, your collection will not be complete without this CD. There’s no doubt that Death is historically important, which is reason enough to add this item to a library collection. Unlike many other historic recordings, however, the music on this particular release was so cutting edge in the 1970s that it still sounds fresher and more innovative than most bands playing today. It’s a definite must-have for all rock-n-roll victims.