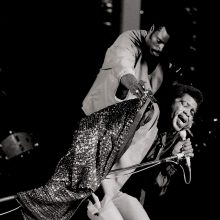 This year celebrates the 50th anniversary of James Brown’s homecoming concert in Augusta, Georgia’s Bell Auditorium on October 1, 1969. Live at Home with His Bad Self captures this historic performance by the legendary Soul Brother No. 1 and the James Brown Orchestra with occasional dialogue by Brown and emcee Maceo Parker. Intended to “attract notoriety” to his hometown, Brown “decided to record this local concert and commemorate it with a live album” for release during the Christmas season of 1969. Unfortunately, the two-disc album was shelved for various reasons. While some selections were issued on previous compilations, Live at Home with His Bad Self finally includes the concert in its entirety from start to finish, just in time for the 2019 holiday season. END_OF_DOCUMENT_TOKEN_TO_BE_REPLACED