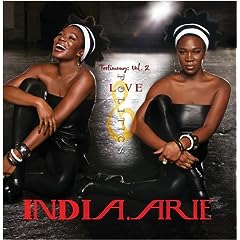 Following 2006’s Testimony: Vol. 1, Life & Relationship, India.Arie’s new release continues her musical exploration of life, ethics, and philosophy.  Where Vol. 1 emerged out of personal heartbreak and introspection, Vol. 2 finds Arie in a more extroverted frame of mind, examining her own place in the world and her relationships with others (seen through romance, poverty, oppression, and religion.)   Arie’s neo-soul vibe has a more urban, electrified edge on this album, with more touches of blues, funk, and Latin rhythms, as well as the acoustic piano and gospel-tinged vocals that figured prominently on Vol. 1. A diverse range of guest artists, including reggae star Gramps Morgan, Côte d’Ivoirian singer Dobet Gnahoré, and Turkish pop queen Sezen Aksu, adds a breadth of musical influences from other styles and cultures.

As with Arie’s last release, Vol. 2 is punctuated with a short song motif, “Grains,” that occurs multiple times throughout the album as intro, outro, and interludes, organizing the album’s structure and providing a unifying idea through repetition and variation.  A prayer of gratitude and connection to the rest of humanity, it encapsulates Arie’s major theme for this album: “I’m grateful that you created me from the same grains, from the same thing / I’m grateful you never cease to amaze me, the way you love me.”  In a liner notes letter to her listeners, Arie writes about her history, the lessons learned through her career, and what she’s trying to say with Vol. 2. “I am a songwriter who writes about love,” she says; “The bottom line is these are my opinions about different things going on in the world and where I fit into all of it.”

Writing about love comes easy to Arie, and the first quarter of Vol. 2 most clearly displays her skills about love songs.  “Therapy”, featuring soaring backup vocals by Gramps Morgan, is the catchiest song on the album, building on the metaphor of love as a healing force.  The soul groove of “Chocolate High” (with Philly soul singer Musiq Soulchild) echoes old-school soul ballads, but its extended chocoholic imagery unfortunately strays over the line from sexy to just cheesy.  Love doesn’t always end happily, of course, so “The Long Goodbye” paints a picture of an imminent breakup viewed with sadness, sensuality, and the wisdom of experience.

“Pearls”, originally by Sade, addresses the oppression of poor women in Africa; Arie’s cover features a mellow Afrobeat accompaniment rather than Sade’s static string accompaniment, as well as Dobet Gnahoré’s vocals, both of which add a musical evocation of Africa.  “The Cure,” a structural and thematic counterpart to “Therapy,” promotes love (romantic, but more importantly, spiritual) as the solution to most of the world’s problems, with Sezen Aksu’s backing vocals in Turkish suggesting a call to prayer and spiritual transcendence.  In this song, Arie also sings a defense of her overwhelmingly positive philosophy:  “It may seem that I’m looking at the world through rose-colored glasses / I believe that it’s so simple that sometimes it looks complicated / God’s love is like the sunshine / it’s there whether or not we recognize it / the most powerful energy in the universe, and all we have to do is use it.”  In this, she sums up both the holistic understanding of self, world, and spirit that she’s reached personally, and to which this album testifies. 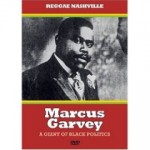 When considering significant figures in Black politics, we must remember the contributions of Marcus Garvey and his efforts to unify Africans and African descendants throughout the world. Born August 17, 1887 in St. Ann’s Bay, Jamaica, Garvey was a publisher, journalist, entrepreneur, and Black Nationalist, as well as a great orator with the ability to reach across existing class and social boundaries. His organization, the Universal Negro Improvement Association and African Communities League (UNIA-ACL), sought to advance the Pan-African philosophy by uniting Africans worldwide with the purpose of bettering industrial, commercial, educational, social and political conditions. Garveyism put race first, followed by self-reliance and nationhood as the way to bring about this unification. His motto of “One God, One Aim, One Destiny” has stood as a testament to his legacy. Many movements have adopted the creed of Garvey including the Rastafarian movement, whose members see Garvey as a profit who predicted the coming of a Black King in Africa. In 1938, His Imperial Majesty Haile Selassie was crowned emperor of Ethiopia signaling to the Rasta that the time for Africa’s redemption was at hand.

Marcus Garvey: A Giant of Black Politics is a documentary about the life and impact of Marcus Mosiah Garvey, Jr. Directed by Howard Johnson, the film offers commentary by historians, family and friends including activist Mariamne Samad, UNIA members Roy Carson and Ruth Prescott, and commentators Vivian Durham, Beverly Hamilton, Prof. Rupert Lewis, Prof David Garrow and Sam Clayton. The film begins with a brief segment about Garvey’s upbringing in Jamaica, citing that his early interest in reading came from his fathers’ and uncles’ extensive libraries. After the historical groundwork has been laid, the film follows Garvey as he journey’s through Central and South America, Europe and the United States. This period of Garvey’s life was instrumental because he was able to see that the Black man’s condition outside of Jamaica were even worse than at home. Noted activist and Garveyite Mariamne Samad points out that there had been others before Garvey who had championed the Black cause, but the problem was that Blacks were “fractionalized” due to location. She also cites Garvey as being dangerous because he addressed Black people as one race. Vivian Duram believes that most did not understand Garveys’ message and cites the dichotomy of race and skin tone as being one of the reasons that Garvey strove to uplift Black self-image.

Garvey came to New York in August of 1916 during WW1. Samad calls him a savior; Roy Carson calls him a redeemer. Samad explains, “When Garvey came to the US Blacks were essentially leaderless, other than the church . . . he found a strange group of people who were black people trying to be white. Garvey showed the Black American that they have a history dating back to Egypt, that their ancestors were Kings and Queens long before the white man crawled out of his cave in Europe.” Beverly Hamilton believes that Garvey’s contribution “first and foremost has been in the psychological arena,” and feels that “what Garvey objected to was that Black people seemed to accept their lot and conditions. Garvey believed that black people were like Rip van Winkle, asleep for a long time, and he was going to awaken them to a higher state of consciousness.” Prof. Rupert Lewis discusses the divide amongst black leaders-those who felt there was a need to return to Africa because there was no place for the Black man in the Americas, and those who felt that Africa was too primitive and savage, and instead promoted integration into American society. Lewis claims that Garvey was trying to find a balance between the two, but remained certain that Africa was central to Black dignity, self-respect, and self-determination. Samad asserts that at the time of Garvey’s arrival, the Mulatto was in charge of the Black society. She fingers W.E.B. Du Bois as one of the lighter skinned mulattos whom Garvey battled with bitterly, and believes he caused a lot of trouble for Garvey and was responsible for fractionalizing the African American population. She also speaks of petty jealousies-the Caribbean blacks didn’t think a black man could be a leader, while American blacks didn’t like an outsider.

A visionary who was well ahead of his times, Garvey was considered dangerous by the U.S. government, as evidenced by the full scale FBI investigation launched by J. Edger Hoover. Prof. David Garrow believes the underlying reason for the investigation was to find a way to deport Garvey, citing the murder accusation in the Esau Ramus case. Eventually, the investigation came to focus on mail fraud associated with his shipping company, the Black Star Line (the means of distribution for Garvey’s Negro Factories Corporation). In 1925, Garvey was charged with filing a false tax return and sent to Tombs Prison in Atlanta where he stayed for two and half years, after which he returned to Jamaica. Roy Carson describes how Garvey rebuilt his organization in Jamaica with great vigor and captured the hearts and minds of Jamaicans. In the end, after attempts to be elected to office failed due to the class system created by the plantation society, Garvey left for England in 1935. He died in 1940 after suffering two strokes and was buried in London. After Jamaican independence was established in 1962, Garvey’s body was returned to the island. The Right Honorable Marcus Mosiah Garvey was honored as Jamaica’s first national hero in 1964.

Marcus Garvey: A Giant of Black Politics offers an interesting perspective of the impact and life of Garvey. Originally shot in 1985, the documentary centers on Garvey the man, rather than on his many accomplishments. The film is loaded with a wealth of visual images, while the soundtrack features a special performance by the legendary Mystic Revelation of Rastafari band.