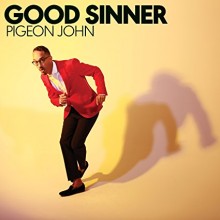 Pigeon John honed his musical skills by performing during open mic nights at the Good Life Café in his home state of California. Even though he’s experienced much success, he’s kept this DIY approach and indie aesthetic central to his music. In fact, this new CD was crowdfunded through the website Pledge. Good Sinner is Pigeon John’s seventh album and features many genres, from his characteristic indie rock songs to covers of the Beastie Boys.

The first single, “That’s What I Like,” is a catchy song about chasing a hard-to-get lover. It features hand claps, hearty brass, and an undeniably pop chorus singing “Na na na, hey.” “Stick Up” is a similarly upbeat, pop song that sounds akin to Pigeon John’s most popular hits such as “The Bomb.”

Pigeon John emphasizes his indie rock side on songs such as “Rebel Rebel,” which is driven by heavy yet simple beats on the drum set and features a catchy whistling section that is sure to be stuck in your head for days. This edgy vibe continues on “Gravity,” a foot-tapping song with an electric, urgent chorus featuring synthesizer.

Though he stays true to his own style, Pigeon John also explores the intersection of indie rock with other genres. He raps on “Shake It Down,” an extremely funky track featuring shouts and jingling bells in the background. His love for this mix of rock and hip hop can also be heard in his mellow cover of the Beastie Boys “(You Gotta) Fight For Your Right (To Party).”

Taking the exploration of genres even further, Pigeon John’s vocals in “Take Off” lay somewhere between melodic country twang and a slow rap that discusses fights, visiting penthouses, and taking off in a beautiful car. The way the vocals are manipulated in “Knock Out” is Beach Boys-esque, with fuzzy harmonies throughout the track. Growing up in California, it seems very likely that Pigeon John was inspired by Beach Boy era love songs, as he sings, “My pretty knockout, you drive me batty like Hollywood.”

Good Sinner explores love and rebellion through a number of genres, though Pigeon John still finds himself most comfortable situated between indie rock and pop. The album is upbeat, and more often than not seems focused on making fun, catchy music. With the varying styles and appealing nature of pop choruses and beats, anyone who listens to Good Sinner will inevitably find themselves humming a chorus hours later.