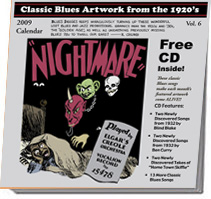 If you’ve never come across the annual Classic Blues calendars produced by collector, dealer, and blues expert John Tefteller, you’ve been missing out on some of the best blues iconography in existence. Each month when you flip over the page you’ll be thrilled with the beautifully reproduced (and often hysterically funny) graphics from the 1920s and ‘30s that were used to promote early jazz and blues records. And that’s not all- the calendars come packaged with an accompanying CD featuring pre-war blues rarities aplenty, including the 12 songs/artists featured in the calendar, plus 6 additional bonus tracks.

This year Tefteller has really outdone himself. The CD features two newly discovered songs by Blind Blake, “Night & Day Blues” and “Sun to Sun,” plus two more by Ben Curry, “The Laffing Rag” and “Hot Dog”- all recorded in 1932 by Paramount in Grafton, Wisconsin. The two songs by guitarist Blind Blake were from Paramount 13123, recorded at Blake’s penultimate session for Paramount in January 1932. Shortly thereafter, Blake literally vanished without a trace, Paramount folded, and no copy of the record has ever been found- until last summer.

The story behind these newly discovered Blind Blake disc is the stuff of dreams for record collectors: “Like a time capsule, this small steamer trunk sat unopened for nearly four decades in a trailer park on the east side of Raleigh, North Carolina. Its contents, about one hundred 78 rpm records, still in their original paper sleeves, represent some of the greatest blues artists active during the Great Depression. . . The records were bought new in the 1930s by an African-American couple living in Granville County, NC, adjacent to Durham County, the epicenter of blues activity in the Carolinas. A telephone tip and subsequent negotiations led to the acquisition of the collection by Marshall Wyatt of Old Hat Records.” The whole “Trunk Full o’ Blues” story, along with illustrations and sound clips, can be found on the Old Hat website. Similarly, the previously unknown Curry disc was discovered last February in a pile of old 78s in Missouri. Several other previously unreleased test pressings round out the bonus tracks.

Other selections on the CD that are represented in the calendar include Kokomo Arnold’s “Milk Cow Blues,” Charley Patton’s masterpiece “Shake It and Break It” (recorded in 1929 in Richmond, Indiana), “Nightmare” (featured on the cover) by Elgar’s Creole Orchestra, Memphis Minnie and Kansas Joe’s “Cherry Ball Blues,” and two sermons- “The Death of Blind Lemon [Jefferson]” by Rev. Emmett Dickenson, and “Death May Be Your Christmas Present” by Rev. A.W. Nix, who sold thousands of records with his hellfire and brimstone preaching. As Tefteller describes the latter sermon, “One can only imagine the Christmas happiness that was wiped out in a single three minute listening of this amazing record! By the time you get to the end, you won’t want to celebrate Christmas . . . or any other holiday. Talk about having the BLUES at Christmas!”

We predict that you, too, will have the blues at Christmas if you miss out on an opportunity to purchase this amazing package.