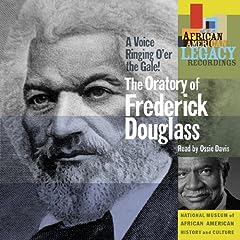 Title: A Voice Ringing O’er the Gale! The Oratory of Frederick Douglass

A Voice Ringing O’er the Gale!: The Oratory of Frederick Douglass is a 5-track CD comprising speeches, written between 1852-1888, of the former slave turned abolitionist, Frederick Douglass.  Although present-day admirers usually come to know Douglass through his three autobiographies and other writings, during his life the orator’s fame centered on his passionate delivery rendered towards describing his experiences as a former slave.

Douglass’ voice was never recorded and the vocal enactment of his speeches in A Voice Ringing O’er the Gale! is delivered by actor/Civil Rights activist, Ossie Davis. With his deep resonant voice, honed acting abilities, depth of understanding, and profound appreciation for the iconic figure of Douglass, Davis attempts to faithfully replicate the actual 19th century experience for the listener.

Addressing his speeches to segregated white, black, and women audiences, Douglass challenged his (white) listeners to acknowledge the plight of the slave and to question the veracity of freedom in a constitution upheld for some and withheld from others (“What to the Slave is the Fourth of July,” parts 1 & 2). In “If There is no Struggle, There is no Progress,” he confronted acquiescent African Americans to ponder the necessity of defying slavery and racism, regardless of the cost, and to consider the courage of those who assumed such a position. Douglass proclaimed freedom of speech as a vital necessity for all Americans in “A Plea for Freedom of Speech,” and expressed his forward-thinking support for the rights of women in “Why I Became a Women’s Rights Man.”

The CD is accompanied by a 31-page liner note insert that provides images and useful background information on both Douglass and Ossie Davis.  The recordings were originally released on two LPs in 1975 and 1977, and the present production by Smithsonian Folkways aims to make Douglass’ legacy accessible to the public through current media.  A Voice Ringing O’er the Gale! is a valuable tool, reminding us that democracy in American has never been a given, and that vibrant dialogue and public debate are as critical for its perpetuation in the present and the future as in the past.