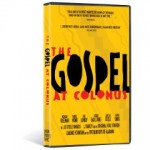 The 1985 Philadelphia performance of The Gospel at Colonus, which originally aired on the PBS series Great Performances, is now available for the first time on DVD and it is both entertaining and enlightening. The stage play is directed by Lee Breuer and based on an adaptation of Sophocles’ Oedipus at Colonus in the version by Robert Fitzgerald. It also incorporates passages from both Sophocles’ Oedipus Rex and Antigone in the versions by Dudley Fitts and Robert Fitzgerald, which are published as the Oedipus Cycle of Sophocles.  Morgan Freeman, Clarence Fountain, Jevetta Steele and Isabell Monk are among the talented cast that frames the Oedipus saga within the African American religious and performance traditions.

A quote by a Village Voice reviewer on the DVD cover describes the performance as “…Europe meets Africa; Classic meets Contemporary; Pagan meets Christian.” The first two attributes are evident within the work’s title. The final characteristic, “pagan meets Christian,” is manifested in various ways.  For instance, presenting the story of Oedipus by using a religious art form, gospel music, extrinsically merges the sacred and secular.  However, Bob Telson, Colonus’ music composer and arranger, uses traditional and contemporary (as of 1985) gospel music styles, thus creating an internal profane and religious fluidity that mixes gospel, blues, R&B, and soul.  This lack of demarcation has always characterized Black artistic expression. The call and response, demonstrative behavior, innuendos, vamps, switch leads, hand clapping, foot stomping, hollers and shouts of the soloists and choir are not only exemplary of elements within such expression, but they also reflect an aesthetic continuum between Africa and African American culture.

While the actors-Morgan Freeman, Carl Lumbly and Isabell Monk, among others- present a persuasive tragedy, the music of this performance is the real star.  Clarence Fountain’s raspy voice takes the audience on a journey that explores a range of textures and moods. J.J. Farley and the Original Soul Stirrers create a logical contrast to the Five Blind Boys, as the former group expands the parameters of the quartet tradition by incorporating a wider range of vocal qualities and styles. In addition, the J.D. Steele Singers demonstrate a blended sound that is reminiscent of timeless R&B/soul ballads of the late ‘70s and early ‘80s. The choir, which represents the people of Colonus, is dressed in colorful and flashy attire while the quartet groups are clothed in matching suits denoting respective ensembles.

The DVD’s picture quality is very clear.  In addition, the video frames create a broad and varied view of the stage, focusing on the soloists, individual groups, choir and the instrumentalists.  Capturing the stage in this manner allows the audience (in this case the DVD viewer) to experience a sense of “being there” at the time and space of the performance.  Such framing was obviously assisted by Breuer’s stage setting, which is an integrated structure that positions actors, instrumentalists and singers on the stage simultaneously. As a result, all involved become a vital part of the drama.

For those interested in the exploration of an alternative staging of a classical tragedy, or those who seek to experience an artistic manifestation of the core Black aesthetic in the arts-or if you simply like great stage plays, this performance is a must see.  The Gospel At Colonus will make a significant contribution to your Christmas stocking!