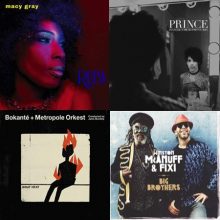 This month we’re rolling out a new and improved website and mobile version of Black Grooves!

For this month’s gospel music selections were looking in our own backyard with releases from two Indianapolis-based artists—Judah Band’s sophomore album Gone Fishin’ and Tyscot Records’ own Bishop Leonard Scott’s praise and worship album Jesus Love Legacy. R&B/soul releases include Unstoppable by Candi Staton and Free Me from Burundian soul singer J.P. Bimeni & The Black Belts.

Wrapping up this issue is the Screamin’ Jay Hawkins compilation, Are YOU one of Jay’s Kids? – The Complete Bizzare Sessions 1990-1994, and our list of September 2018 Black Music Releases of Note.