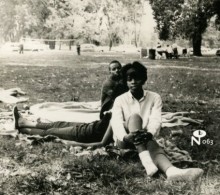 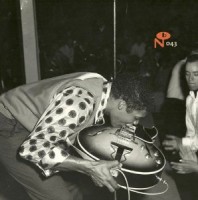 Eccentric Soul: The Dynamic Label, a recent offering in Numero Group’s invaluable Eccentric Soul series, chronicles the trajectory of a tiny San Antonio, Texas-based record label and its owner, Abe Epstein.  Epstein was a local real-estate mogul and self-described recording addict who founded nine Teaxs-based labels in the sixties and early seventies, all of which struggled, largely unsuccessfully, to make waves on the national music scene.

Dynamic 101 was a thoroughly inauspicious beginning, credited to Little Jr. Jesse and The Tear Drops and, along with the group’s other cut presented here, entirely forgettable.  But things improved greatly with the release of “I Gotta Know’” sung by The Tonettes, a quartet of high-school girls from Lubbock.  This chunky groover, along with the medium-tempo “My Heart Can Feel the Pain,” reveals a surprisingly accomplished vocal group with an adept lead singer and sweet background harmonies.

Dynamic’s best and most well-known act was The Commands, a polished and talented vocal quartet hailing primarily from nearby Randolph Air Force Base.  Their 1966 single, consisting of “No Time For You” (pilfered from another local group) and “Hey It’s Love,” drew widespread airplay across Texas, and gave Dynamic its first hits.  “No Time For You” was covered by The O’Jays shortly after release, prompting Epstein to bring The Commands back into the studio for “Don’t Be Afraid To Love Me” and “Must Be Alright,” the latter an especially energetic cut featuring the lead tenor of composer Dan Henderson.  Two years later, the group also recorded Dynamic’s last single, with “I’ve Got Love For My Baby” the standout that led to their signing with RCA Victor, only to see the group disband soon after.

The Webs, a Galvaston-based band with the soaring, Sam Cooke-influenced lead singer Willie Cooper, also features prominently in this overview of Dynamic history.  Their first releases on the label were actually reissues of earlier recordings for Whiz Records, and they are the best of a so-so lot.  Two later cuts, recorded specifically for Dynamic, are serviceable enough but, like the earlier ones, suffer from some extremely sour horns.

Four tracks are devoted to Doc & Sal, yet another group with its origins in the Air Force.  This time the principals—singers Richard “Doc” Davilla, a San Antonio native, and Salvatore “Sal” Sabino—were seamen aboard the USS Saratoga, then stationed in the Mediterranean.  After their stint in the service, they teamed up to record “Laughing To Keep From Crying,” with Epstein the engineer on the date.  He signed them to Dynamic, where they cut two singles with the Royal Jesters as backing band and a member of the San Antonio Symphony to add some string sweetening.  While the recordings fared well locally, none of them caught on nationally, and that was pretty much it for Doc & Sal.

The disc is rounded out with one track by Bobby Blackmon, a showy guitarist who’s wildman image graces the cover of this reissue, and who ups the funk quotient considerably with “She’s Gotta Have Soul.”  Blackmon managed a brief career as a sideman, backing Albert Collins and Johnny Copeland, among others, before leaving the music business for a career in the pharmaceutical industry.  After retiring from his day job, he resurfaced in the early 2000s as bluesman “Beautiful” Bobby Blackmon.

Like other Eccentric Soul releases, this is a fine survey of a niche territory during the formative years of soul music, when labels across the country were looking to jump on the bandwagon and, just maybe, catch lightening in a bottle with a national hit.  Also consistent with previous Eccentric Soul entries, the accompanying notes are informative and thorough, marred only by a somewhat scattershot organization and some frequently elliptical writing.  But despite these minor flaws, soul music aficionados will surely want to snap up this incredibly rare music, and we can all look forward to Numero’s promised continuation of their survey of Abe Epstein’s enormous legacy of Texas pop music.