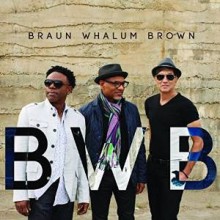 Smooth jazz is a guilty pleasure of mine, one that often gets far more flak than it deserves. Full disclosure: during my senior year of college, I wandered by a floor mate’s open door to ask what was that hip music she was listening to, only to discover that it was The Weather Channel’s weekend forecast for Charlotte, North Carolina. As of today I’m shedding the stigma that fans of “serious jazz” feel often feel about digging the sub genre. “Local on the 8’s” guitarist Norman Brown has partnered with fellow smooth-jazzers Kirk Whalum and Rick Braun to record a groove-based release full of with tight playing and tasteful arrangements.

This group is perhaps best known for their 2013 album of Michael Jackson covers, Human Nature.  That release hasn’t gotten too much play, which may not come as a surprise: it is no accident that Jackson was called “The King of Pop” — he was inimitable, therefore interpreting his repertoire is a thorny proposition at best.  However, BWB gets a good bit funkier on this self-titled album, in large part thanks to the group’s focus on original material.  BWB formulated these tunes while hanging out at Rick Braun’s home studio in Los Angeles and is backed by a rotating rhythm section of strong players, lending voice to compelling new compositions and improvisations.

One interesting part of this release is the band’s chanted choruses, which feel as though they may have been drawn from the annals of 70s funk — these cats are primarily instrumentalists rather than singers, but BWB’s songs have lyrics that may broaden their crossover appeal to adult contemporary audiences.  They also make the band’s primarily groove-based instrumentals more listenable: rather than just improvisations over a couple of chords, these vocals make otherwise minimal compositions feel more like full-fledged songs .  The trio’s playing is expressive throughout, with many songs being characterized by the three soloists playing intertwined melodies (“BWB”).  They also play compelling solos, often trading improvisations that feed off of the members’ stellar interplay with one another (“Bolly Bop”).  Braun makes great use of double time in his fluglehorn solo on “I Want You Girl,” Brown gets the opportunity to really take the band for a walk on “Memphis Steppin’,” and Whalum gets saxy on “Hey Baby.”

If you want to give smooth jazz a shot, BWB is a great place to start.  This album proves that the sub-genre isn’t all cheesy synthesizers and triangles dinging off in the distance, but that really gifted players like to get down on the light-funk side of things.