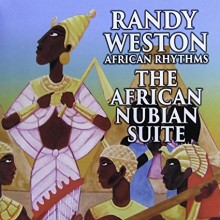 Released just in time for Black History Month, jazz elder Randy Weston’s epic work, The African Nubian Suite, traces the history of the human race through music, with a narration by inspirational speaker Wayne B. Chandler, and introductions and stories by Weston in his role as griot. This recording captures a live performance at New York University by the Institute of African American Affairs on Easter Sunday, 2012, and indeed possesses a sermonic quality. Stressing the unity of humankind, Weston incorporates music that “stretches across millennia”—from the Nubian region along the Nile Delta, to the holy city of Touba in Senegal, to China’s Shang Dynasty, as well as African folk music and African American blues.

Each movement of the suite involves different musicians, who enter a circle in order to “tell stories.” The opening tracks lay out the story of “Ardi” (Ardipithecus ramidus), referencing the oldest known remains of a human-like female hominid who lived in Nubia over 4.4 million years ago. Disc one features Cecil Bridgewater on trumpet (“The Call”), Howard Lewis Johnson on tuba (“Ardi”), Moroccan musician Lhoussine Bouhamidy on gnawa (“Sidi Bilal”), Gambian musician Salieu Suso on kora with T.K. Blue on flute (“Spirit of Touba”), Min Xiao-Fen on pipa (“The Shang”), and Martin Kwaakye Obeng on the Ghanaian balafon (“Children Song”), all accompanied by Weston on piano.

Disc two traces the development of the blues, “from its origins in the Niger Delta to its transmutation in the Mississippi Delta.” Weston ponders the roots of the blues in his introduction before launching into “Blues for Tricky Sam,” featuring a solo by Robert Trowers on trombone in a tribute to the bluesy nature of Duke Ellington’s horn section. “Cleanhead Blues” is a tribute to Eddie “Cleanhead” Vinson, performed here by Weston and Billy Harper on tenor sax. Weston then heads further south to Central America, drawing from his own Panamanian roots on “Nanapa Panama Blues” with Alex Blake on bass.

After a poignant monologue by Chandler on “The Woman”—the basis of all creation—Weston launches into a song by the same title featured poet Jayne Cortez, which is definitely one of the highlights of this set. The two-part movement “The African Family” introduces African percussion with drummer Lewis Nash and percussionists Neil Clarke and Ayanda Clarke, followed by the “battle of the saxophones” between T.K. Blue and Billy Harper. The project concludes with “Love, The Mystery Of,” bringing the jazz musicians together in a short instrumental penned by Guy Warren.

In these troubling times when our nation is divided by politics, race and religion, Weston uses The African Nubian Suite as a vehicle to remind us of our common heritage: “We all come from the same place – we all come from Africa.” As eloquently stated by Robin D.G. Kelley in the liner notes: “There are no superior or inferior races, no hierarchies of culture, no barbarians at the gate. Instead, Africa—its music, land, people, spirituality—tie us all together as a planet.”