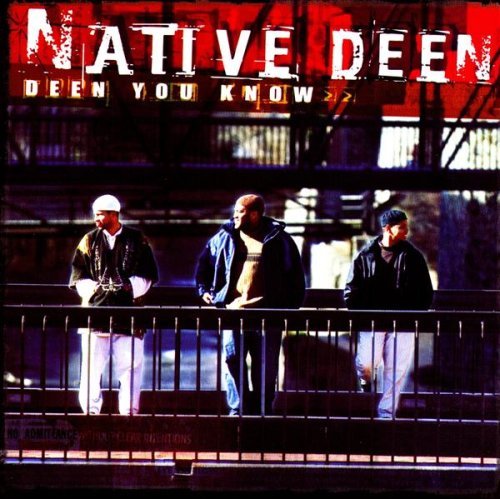 Native Deen is an African American Muslim vocal trio formed by Joshua Salaam, Naeem Muhammad, and Abdul-Malik Ahmad. Salaam, Muhammad, and Ahmad have all been actively involved with various Muslim youth organizations and met through their involvement with the Muslim Youth of North America (MYNA), particularly the MYNA Raps project. Combining their dedication to Allah, young people, and ministry through sonic performance, the group has performed for Muslim audiences across the United States as well as in England and Australia. Their two CDs, Deen You Know and Not Afraid to Stand Alone were created with Muslim youth in mind and offer up a wealth of religious lessons as well a strong source of moral support for members of a religion that has been a frequent target of hostility and intolerance within the United States.

For those used to Western pop, Native Deen’s style may take some getting used to. Because of Islamic prohibitions on instrumental music and the nature of the album as a religious CD, the group has purposefully adopted a musically thin texture. Although a few of tracks, such as “The Deen You Know,” “Intentions,” “Small Deeds,” and “Sakina” incorporate xylophone, most of the songs rely solely on drums and vocal harmonization to add richness and texture to the sound. In many cases the drums are pitched to add a slightly melodic quality.

The vocal harmonies and melodic lines often embrace the singing style of nasheeds-a type of Muslim devotional song that sounds somewhat similar to Gregorian chant-intermixed with more laidback forms of American rap. For example, the song “For the Prophets” from their first album alternates a chorus sung in Arabic and a Middle Eastern style accompanied by hand percussion with glibly rapped verses about the lives of Musa (Moses), Isa (Jesus), and Muhammad backed by drum machine and turntable scratching. The overall feeling of the albums is subdued, austere, and very unique.

Native Deen’s first commercial release, Deen You Know (“Deen” is Arabic for religion), take a slightly narrative approach and is structured around an average day for the group members. The first track “Alhamdullilah” opens with the group stopping for gas on their way to the studio to record their next album. To warm up their voices for the session, they decide to perform a South African vocal drill, and to perform it “Native Deen style.” The song, which also functions as a benediction, consists solely of the repeated phrase “Alhamdullilah subhanallah” (“praise be to God, glory to God”) sung in tight, Middle Eastern style harmony over a throbbing bass line.

From here, each song on the album offers up a sung lesson on Islam. “Dedication” praises parents who raise their children to follow the path of Islam and young Muslims who choose to embrace lives of purity and morality. “Paradise” urges Muslim teenagers to pray to Allah for strength against the temptations of drugs, sex, and materialism and includes criticism of other rappers such as JZ, LL Cool J, Eminem and Genuine, warning that “Living ghetto fabulous will lead you straight to hell.” “Intentions” raises the question of whether one is following the path of Islam for the sake of pleasing Allah or to gain status and praise.

Some of the other lessons are relatively similar to ones you would expect to find on a CD of Christian devotional songs. For instance, the theme of convincing a sinner not to give up hope because it is never too late to ask God for forgiveness is treated in “Looking Glass” while “Small Deeds” is about the importance of performing acts of kindness consistently throughout our everyday lives. “Small Deeds” also contains some clever English and Arabic rhyming, including lines such as:

Other songs may be a bit more difficult for non-Muslims to grasp. Although “Drug Free” with its warnings about avoiding mind and body altering substances because of the risks of addiction, deteriorated health, and loss of self-control may initially sound familiar, the extension of the word “drug” to alcohol and cigarettes (the former of which is explicitly forbidden by the Qur’an) may seem a little odd. The concept of “Sakina,” or a feeling of peace of heart and tranquility sent by God in times of stress, may also be a foreign concept, although certainly lines like “Then when I come and I see my daughter’s face so bright / With smiles there to greet me at the door, like a beautiful light / I can only thank Allah for this blessing on me / For giving me Sakina, this tranquility!” will resonate with many people.

For those concerned about missing out on the meaning of the songs due to the occasional use of Arabic terminology, the accompanying booklet provides almost word for word liner notes with translations. The booklet in and of itself makes use of modern aesthetics and could almost be mistaken for accompanying any recent rap release if it weren’t for the textbox inserts containing verses from the Qur’an.

Despite offering an interesting sonic mix of Muslim and hip hop culture, the CD does have a few problems. The dialog between songs, while at first interesting and somewhat amusing, quickly grows stale. Its longevity isn’t helped much by the stilted delivery of the dialog, which feels a lot like it was pulled straight out of an afterschool special. Instead of relegating the dialog to individual tracks so that the listener could easily banish them from their iPod track list, they occur at the end of almost every track and will probably have people scrambling for the advance track button by the third or fourth time around. “Drug Free” also has a number of musical problems. Not only does it feel like someone clipped off the beginning, but there are some serious pitch problems at points.

Overall, this album offers some fantastic and uplifting listening material for Muslim listeners. For everyone else, this CD offers an excellent overview of both Islamic beliefs and the moral and religious concerns faced by American Muslims during their daily lives. 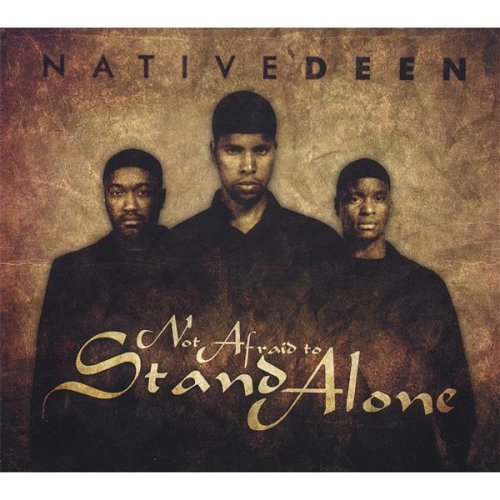 Published two years after their first CD, Native Deen’s Not Afraid to Stand Alone also opens with a benediction entitled “Subhan Allah” (Glory to God), which features the profession of the Muslim faith. The rest of the CD is not simply a repeat of the group’s earlier efforts, however. Not only is the sound more polished, but the group has incorporated a wider range of sounds and themes, adding to Not Afraid‘s overall complexity. Perhaps the most notable changes are the introduction of South African style singing, particularly on “Eid Morning” and “Rain Song,” as well as more brooding examinations of the discrimination frequently faced by Muslims living in America.

If Deen You Know was aimed at instructing listeners in the way of Allah, Not Afraid to Stand Alone seeks to strengthen group identity and a sense of hope and solidarity in the face of adversity. “Stand Alone,” the title track and the most widely publicized song on the album, tells two stories of perseverance in the face of religious intolerance. The first story is about a single mother who embraces Islam only to be denied a job because she refuses to give up her hijab, the traditional headscarf worn by Muslim women as a symbol of modesty. The second story is about a student who is teased for praying, fasting, and refusing to wear clothing associated with gangsta culture. The song urges Muslims to maintain their faith despite pressures to conform. In addition to the CD, “Stand Alone” is also available in the form of an online music video.

“Still Strong,” featuring guest rapper Islam B., discusses the false arrest of Muslims by the US government following 9/11 as part of the war on terror. Many of these Muslims faced illegal interrogations and others experienced months of imprisonment during which they were denied access to a lawyer, a trial, or even a means of informing family members of their whereabouts. Although the tone of the song is understandably indignant at this treatment, it simply urges Muslim to remain strong and unbroken despite these harsh injustices.

A third song tackling discriminatory behavior is “Be at the Top,” which complains about the negative depictions in the media of Muslims as violent and barbaric. Native Deen compares the treatment of Muslims today to that of African Americans in the 60s and the Japanese in the 40s and questions why anyone would trust TV for their knowledge about other cultures. In response to the people who do act on what they glean from the media, the group comments:

To solve the problem of the media’s anti-Muslim bias, Native Deen proscribes Muslim self-improvement and aggressively training a new generation of Muslim lawyers and journalists.

Not all the songs on the album are focused on countering stereotypes, however. There are still some religious lesson songs, such as “Lord Is Watching” and “Pray Before…,” songs which respectively remind listeners that that Allah is aware of their bad deeds even when no one else is and that there is no excuse for skipping prayer. “Life’s Worth” bemoans the war in the Middle East and how Christians and Muslims are “dying over different points of view.”

On the happier side of things, “Sea of Forgiveness,” “Tala’al Badru,” “Eid Morning” are all songs offering praise to Allah and Muhammad. “Labank” sings about experiencing the Hajj (the pilgrimage to Mecca) and the wonders of performing traditional religious rituals beside Muslims from around the world. “M-U-S-L-I-M” is a song made popular by Native Deen’s live performances and is described on the CD as helping young Muslims to get “hyped.” Perhaps the sweetest song on the album is “Zamilooni,” which tells the story about the relationship between the Prophet Muhammad and his wife Khadijah. Khadijah was a successful noble woman and entrepreneur who turned down a sea of suitors to marry Muhammad despite his lack of wealth and status. The title, “Zamilooni” means “hold me” and refers to Muhammad’s cries for comfort to Khadijah after his first confusing encounter with God and in the times of hardship that followed.

This time, the structuring device of the CD takes the form of a radio DJ announcing the release of Native Deen’s latest CD. The call-ins to the release show feature prominent members of the US Muslim community including Dr. Ingrid Mattson, President of the Islamic Society of North America; Imam Siraj Wahhaj, Imam of Al-Taqwa mosque in Brooklyn; and Rami Nashashibi, the executive director of the Inner-City Muslim Action Network (IMAN) praising Native Deen and speaking messages of hope to Muslim listeners. Correcting their mistake from the last CD, Native Deen has moved these spoken dialogues to independent tracks. The person programming the headings for the CDs apparently missed this fact, however, so the song titles displayed by your computer or CD player probably won’t match the actual songs after the first track.

Not Afraid to Stand Alone doesn’t have much in the way of liner notes, so there isn’t a printed translation of the Arabic provided. The lyrics are, however, available online through Native Deen’s website. In place of lyrics, the booklet includes a call out to historic figures who serve as role models to African American Muslims including Bilal Ibn Rabah (the first black Muslim), Hagar (a slave and the Mother of Ishmael), Malcolm X, and Muhammad Ali.

All and all, this is an excellent CD. Again, the content is more brooding and many of the songs tackle thornier sociopolitical issues than those from Native Deen’s first release. While I could see playing Deen You Know to pretty much anyone, Not Afraid to Stand Alone might prove confusing and even troubling to children and to non-Muslims who are completely unfamiliar with Islam simply because it contains a number of more complicated concepts and allusions. For these audiences, my recommendation would be to let Deen You Know serve as your introduction to Native Deen, and to move on to Not Afraid a bit later.