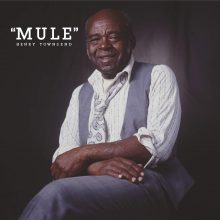 Hailed as one of the last of the original St. Louis pre-war blues musicians, the late Henry “Mule” Townsend was equally skilled on piano and guitar. His distinctive string snapping style drew heavily upon his Mississippi Delta roots as well as the ragtime and jump blues of his adopted city of St. Louis. Townsend, who began his recording career in 1929 for Columbia Records, holds the distinction of the only blues artist to have recorded during every decade from the 1920s to the 2000s. He accompanied many of the great blues musicians over the years, including Roosevelt Sykes, Sonny Boy Williamson, and Robert Nighthawk. In 1980, the Nighthawk Records label out of St. Louis wanted to honor Townsend with an album worthy of his “unique genius,” and “thus secure for him the recognition that an artist of his stature and historical importance deserves.” The result was the “improvised” solo album, Mule, which highlights Townsend’s vocal and keyboard skills. Assisting musicians include another country blues legend, Yank Rachell, on mandolin and guitar, as well as guitarist Norman Merritt and Henry’s son, Vernell Townsend, who adds vocals on several songs. END_OF_DOCUMENT_TOKEN_TO_BE_REPLACED