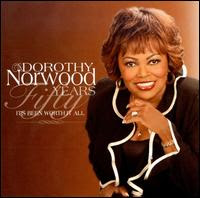 Title: Fifty Years: It’s Been Worth It All

When I first met the “Gospel Storyteller,” Dorothy Norwood, in the early 1990s, I was unnerved to come face to face with a diminutive, smiling, pleasant woman. She seemed more like a sweet auntie than what I expected a church-wrecking singer who could bulldoze her way through a hymn until the notes begged for mercy to look like.

Nearly two decades later, Norwood looks and sounds just as good and strong as she did back then. As a tribute to a half-century as a gospel soloist, the former Caravan delivers a series of traditional gems on Fifty Years – It’s Been Worth It All. The original versions of some tracks, such as “Denied Mother,” defined her style and placed her on the express lane to stardom.

Mother, in fact, is a very important theme on Norwood’s new retrospective. No less than four of the thirteen songs on the album deal with a praying, teaching, loving mother. This includes the aforementioned “Denied Mother” (on the CD, Norwood performs the story song for a live audience) and “Tribute to Mama,” which bestows ultimate honor to a mother who can teach her children right from wrong.

Another Norwood favorite featured here is the congregational classic “Victory is Mine,” which benefits from ample vocal backing by the exciting Ricky Dillard and New G.

Victory Is Mine (Remix) – Doro…

To this day, Norwood still leaves scorch marks on my speaker cones as she rip-roars through songs such as “I Have a Friend” and the old favorite “My Rock.” From the opening rouser “I Thank You Lord” to her earth-shattering renditions of “Precious Lord” and “I Will Trust in the Lord” during the live version of “Denied Mother,” Norwood acknowledges that yes, it’s been fifty years…yes, it’s been worth it all… and yes, she can still out-shout the shouters and send sinners single-file to the mourning bench just like singers half her age. A superb outing from a master!

Posted by Bob Marovich, from the Black Gospel Blog

Editor’s Note:  Bob has been the host of WLUW’s “Gospel Memories” radio show since 2001.  Starting this month, you can now hear “Gospel Memories” live on 88.7 WLUW Chicago every Saturday morning from 10 to 11 a.m.  Go to http://www.wluw.org/, click the Listen Live button, and enjoy “Gospel Memories” from wherever you may be!