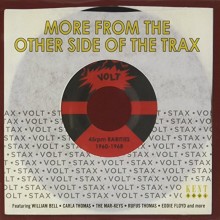 More From The Other Side Of The Trax: Stax-Volt 45rpm rarities is the second volume of its kind from the Kent Soul imprint.  This new compilation offers entry points for both the novice and hardcore collector, bringing together selections that have not been together in any capacity on CD up until this time.

For the novice, this is a mix of great tracks from early ‘60s rhythm and blues vein, as beginners may be familiar with artists such as Rufus Thomas and the Mar-Keys, both featured in multiple tracks.  For dedicated fans, the collection offers numerous B-sides from the Stax “Blue” period (so named for the color of the label on the 45s during this period) that surprisingly were not present on the Complete Stax Volt Singles volume released in the 1990s.

Highlights of the arrangement include Rufus Thomas’ cover of Billie Holiday’s “Fine and Mellow,” which illustrates Thomas’ proficiency as a jack of all trades.  This track finds the artist, better known for his funky workouts, clearly in a blues mode but still giving a fantastic performance. The Mar-Keys, best known for their instrumental hit, “Last Night,” appear with a great set of tracks including “Grab This Thing Part 2”, which is as funky as they come.

William Bell, who is currently experiencing a renaissance in popularity, appears with a few tracks, as well. “Whatcha Gonna Do” hints at where Stax would go during its “Yellow” period with a funky soul orientation. Carla Thomas’ “Puppet” shows that contrary to popular belief, Stax was very much interested in pop appeal, as its string arrangement adds drama and “sweetening” to a great vocal performance by Ms. Thomas. Lesser-known early Stax acts such as Barbara and the Browns appear the tracks “I Don’t Want Trouble” and “You Make a Strong Girl Weak,” respectively sounding more like traditional rhythm and blues than the soul sound for which Stax would become known. On “Never Let You Go” by Carla & Rufus Thomas, you can almost hear the fun the father/daugher duo had performing together.

Rounded out with liner notes for each group written by Tony Rounce, More From The Other Side Of The Trax sheds some light on some great singles that have remained unavailable outside of their original vinyl release until now.