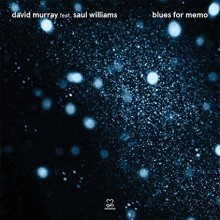 Released just in time for Black History Month, Blues for Memo is a new album by saxophonist David Murray and poet Saul Williams.  Williams and Murray met in 2014 at the funeral of the revolutionary poet Amiri Baraka, at which Williams performed a poem and Murray (who worked with Baraka in the past) was in attendance. The chance encounter led to a collaboration between the two artists, with Williams sending Murray a collection of poems to set to music.

Like Baraka, Williams is a challenging poet. He is socially and politically engaged and consistently employs images that are a gut punch to listeners. The tracks on Blues for Memo feature Williams doing what he does best, stringing together images that address topics ranging from politics to the nature of consciousness. On “Cycles and Seasons,” Williams thrives on juxtaposition of large concepts, such as dietary tradition and health to capitalism and forced labor.  “Deep in Me” takes on cosmic themes, with lyrics that consider volcanic, geologic and cosmic time in relationship to individuals’ perception of the universe.

On the track “Obe,” Murray and his outstanding band match dissonant bebop with lyrics that take on what Williams critiques as a cultural self-obsession, asking whether a variety of pursuits are “self-actualization or self-image actualization.” “Red Summer” is a gospel-inflected ballad about racially-influenced killings of African Americans, from the Mother Emanuel Baptist Church massacre to the wave of police killings of unarmed Black men and boys that sparked a national conversation about continuing systemic racism in American society.

Murray’s task is a difficult one—to compose an appropriate soundtrack to the complex, emotionally-charged themes that Williams adeptly addresses throughout the course of this album. Murray achieves this goal handily — even the instrumental numbers on this album are delivered with the perfect tone. For instance, the heartfelt “Blues for Memo,” a tribute to Istanbul’s jazz legend Mehmet “Memo” Ulug, is solemn and joyous simultaneously, incorporating sounds that “Memo” likely would have appreciated, including elements from blues as well as Turkish music. The latter is provided by Aytac Dogan on kanun, a middle-eastern zither.

Williams and Murray are joined by an overall outstanding cast of musicians, including Dogan, Orrin Evans (piano), Nasheet Waits (drums), Jaribu Shahid (bass), Craig Harris (trombone), Pervis Evans (Vocals), Jason Moran (Fender Rhodes), and Mingus Murray (guitar). Overall, Blues for Memo is both musically beautiful and conceptually challenging, an album best explored gradually and one which holds enough details for listeners to continually return for something as yet unheard.