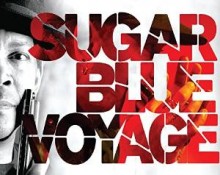 Contemporary blues musician Sugar Blue (a.k.a. James Whiting) has gifted us with his first studio recording in five years. On Voyage, the Grammy Award-winning harmonica virtuoso and vocalist presents 11 original songs, all of which he wrote or co-wrote, plus a great cover of the Ray Charles’ song “Mary Ann.” Backed by a tight band featuring Rico McFarland on guitar, special guests Johnny B. Gayden and Bill Dickens on bass, plus Damiano Della Torre on keyboards and Brady Williams and Michael Weatherspoon on drums, the album reflects their wide ranging musical tastes.

Sugar Blue, who has frequently performed outside of the blues genre—most notably with Frank Zappa, Bob Dylan, and the Rolling Stones—was also influenced by the jazz of Dexter Gordon and the R&B of Stevie Wonder. These influences are apparent on the opening track, “On My Way (Sarah’s Song),” an optimistic song about making a new start that’s dedicated to his daughter. Sugar’s smooth vocals and close harmonies hearken back to early ‘70s pop and R&B, in direct opposition to the standard, gritty delivery of most blues singers.

Sugar’s harmonica makes a grand entrance on “One,” which begins with an extended solo. Though more of a traditional blues song in structure, there’s a definite shift towards jazz in the chorus. The instrumental “Sugar Blue Boogie” is a definite highlight of the album. This fast and furious shuffle demonstrates Sugar and the band’s virtuosity, and they even throw in some countrified guitar picking for good measure. That countrified style continues on “New York City,” featuring Max de Bernardi on guitar, who co-wrote this autobiographical song chronicling Sugar’s life as a Harlem-raised blues musician. Midway through the track Sugar gives shout-outs to those who influenced him along the way: Victoria Spivey, Muddy Waters, Memphis Slim, Louisiana Red, and Willie Dixon.

Sugar recently married bassist Ilaria Lantieri, who also performs on the album and likely inspired the track “Love is in the Air,” which has a tinge of reggae rhythms under a harmonica solo that speaks of love and satisfaction. Eddie Shaw, the legendary sax player from the Howlin’ Wolf band, assists on “Mercedes Blues”—one of the most traditional tracks on the album, along with the humorous “Cyber Blues,” which any listener will relate to. Another stand out track is the jazzy “Life on the Run,” featuring vocalist Maya Azucena and Sonix The Mad Scientist (the two are collaborating on an album scheduled for release later this year, and Sonix performs with Sugar in the group Next Level).  The album closes with “Time,” giving Sugar a final opportunity to unleash his harmonic on several solo interludes, while singing about the need to seize the moment because “time is moving on.”

Voyage is a delightful and very forward looking album, offering a wide range of styles while inviting us along on one man’s journey through the trials, tribulations, love, and joy of life in this world.