Following are additional albums released during May 2019—some will be reviewed in future issues of Black Grooves. END_OF_DOCUMENT_TOKEN_TO_BE_REPLACED 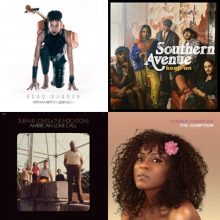 Welcome to the May 2019 issue of Black Grooves, sponsored by the Indiana University Archives of African American Music and Culture. Our featured title this month is Rhiannon Giddens’ third solo album, there is no Other, which speaks to the practice of “othering people” for economic and political gain.

Gospel music releases include Earl Bynum’s This Song’s For You, The Tommies Reunion (aka Thompson Community Singers) self-titled album, and Live on the East Coast from Florida sacred steel group The Lee Boys.

Wrapping up this issue is our list of April 2019 Black Music Releases of Note.