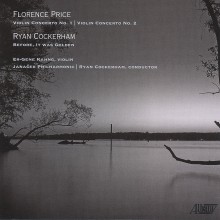 As a scholar specializing in the art songs of Florence Price, it is always a special treat to spend time with her instrumental music! The recent release of Er-Gene Kahng (violinist) and the Janaček Philharmonic’s recording of Florence Price’s Violin Concertos Nos. 1 and 2 is representative of the growing buzz surrounding the works of Florence Price. Since the University of Arkansas Special Collections’ acquisition of formerly unknown manuscripts in Price’s hand, scholars and musicians have flocked to this diverse and expressive repertory.

The liner notes of the recording, provided by renowned scholar of American orchestral music Douglas Shadle, provide a thorough musical analysis. Therefore, I will focus on the particularities of this recording as well as some interesting semiotic aspects.

Er-Gene Kahng’s virtuosity is on full display in her sensitive execution of the alternately cantabile and brilliant style melodies of Violin Concerto No. 2 (track one). I am immediately struck by the timbral variance that the Janaček Philharmonic achieves under the guidance of conductor Ryan Cockerham. The tumultuous and heroic final section avoids a colorless and bombastic fortissimo in favor of a broadness and majesty. This can be attributed to the sensitive shaping of phrases by the string sections, and the stunning ensemble of the woodwinds and brass. While Shadle refers to Price’s first violin concerto as “an episodic rhapsody on a sweeping opening theme first stated by the orchestral strings,” a similar approach is evident in Violin Concerto No. 2. The rhapsodic tone can be attributed to the abandonment of a clear-cut sonata form in favor of introducing additional motivic material. Price displays a preference for introducing multiple motives of differing contour and harmonic complexity and reconciling the material with a loose recapitulation that serves the purpose of concluding the piece in a way that is harmonically closed. However, the return of the A section is usually not a verbatim quotation, and often riffs on or further develops themes introduced in the exposition.

Given the time period of the composer’s milieu (1888-1953), as well as the pressure from the Harlem Renaissance bourgeoisie for “Negro uplift,” it may be expected that Price would include quotations of Negro Spirituals in this piece. After all, Alain Locke lauded Harry Burleigh’s concert spirituals, and favored William Grant Still’s Afro-American Symphony. As Shadle states, “Under the influence of Dvorak and, later, Samuel Coleridge-Taylor, younger musicians like J. Rosamond Johnson and Harry Burleigh continued to theorize about how to best incorporate the spirituals into the living musical practices of African Americans.” I, along with Shadle, note the way in which Price enfolds some of the signifiers of the Spiritual (blue notes, layered polyphony, and pentatonicism for example) in her orchestral pieces like the Symphony in E minor without directly quoting the spirituals. Rather, she creates an organic synthesis of her conservatory training and her roots in Afrological music. In a class essay quoted by Shadle, Price states, “We are even beginning to believe in the possibility of establishing a national musical idiom. We are waking up to the fact pregnant with possibilities that we already have a folk music in the Negro spirituals—music which is potent, poignant, compelling. It is simple heart music, therefore powerful.” This synthesis is not one in which her blackness is sublimated within the context of a European idiom; instead she uses her wide-ranging reference points to create markedly expressive works that speak to her own narrative.

Price’s organ training comes through in her homophonic treatment of the orchestra as the violinist plays in a brilliant style that evokes bird song, and later, flowing water. The musical space this choice creates is evocative of a pastoral topic, but she evokes the Sturm und Drang topoi of Brahms and even Tchaikovsky when the tempo increases and the brass makes an entrance toward the end. All in all, Price’s prowess as a composer of expressive musical narrative is on full display in the second symphony. Kahng’s clear, technical, yet expressive playing serves to further the composer’s intent.

Violin Concerto No. 1 (track 2) was composed in 1939 and takes on a more traditional form. Once again, Kahng shocks and amazes as she expertly performs a strikingly chromatic florid cadenza in the tempo moderato. I reached out to Kahng to discern if she composed any portion of the cadenzas, and I was pleasantly surprised to find that every pitch was notated by the composer! Price includes challenging double stops that almost emulate the rustic color of fiddle or banjo. The cadenzas dovetail seamlessly into the pentatonic opening theme. The call and response topic appears as alternating statements between the string orchestra, solo violin, a flute singing a bird song, and even a brief brass choir. The piece ends with aural fireworks featuring impressively brisk arpeggios in the solo violin as the harmony ventures chromatically to distant keys. The final codetta is a con brio exclamation of the solo violin caller and the orchestral respondent in unison. This moment is reminiscent of a communal outburst during a black church service, but within the harmonic context of a Eurocentric musical construct.

The second movement, Andante, displays more of a spiritual topic, passing the pentatonic central themes from the first movement to the violin in its most vocal register—the middle. The orchestra, as Shadle notes, is more homophonic here, emulating a hymn and sensitively shaping this cantabile movement with gradual arcs of mounting emotional intent. The violin again has moments of cadenza, but considerably shorter than those at the beginning. A second motive in minor pentatonic appears in the violin, accompanied by sighs from the orchestra that emit the affect of the sorrow songs. The greater involvement of woodwinds coupled with the sinuous treatment of melodic contour emulates the stillness of a dusk in Arkansas—the composer’s birthplace. This spiritual lullaby comforts the listener, but the calm is interrupted by a tempestuous final movement.

The third movement is a tour-de-force that demands an impressive level of breadth from the orchestra. The first cadenza wanders so chromatically, that it’s difficult to discern a harmonic direction. However, the piece is held together by the fraught topical material meeting with a gallop-like pentatonic theme. If it were more syncopated, this section would sound like a juba dance or cakewalk. The more sonorous pentatonic theme—carrying with it the signification of the spiritual—exists in an oppositional relationship with a more chromatic counter-topic. The piece ends with a flourish, satisfying the listener with the confluence of the orchestra and the violin in the pentatonic theme.

My brief correspondence with violinist Er-Gene Kahng was overwhelmingly positive. In her response, Kahng displayed a keen awareness of the importance of the project in question, and an overarching respect for Price’s talent:

“It was, as you can imagine, a thrilling experience to perform these concertos! It undeniably stretched me as a violinist and artist; without being able to have an actual conversation about the concerto, I developed a closer relationship to the manuscript. Because of this pioneering aspect with regard to both the work being rediscovered and its fully orchestrated performance being its first to our knowledge, I found myself asking performative questions I never thought I’d ever find myself asking. There was a freshness that created a welcome jolt to my normal methods of interpreting works (and developed my skills as an interpretive artist), and the simple pleasure of discovering something new is always significant, valuable, and emotionally fulfilling for me. I feel more complete now having had the opportunity to interpret, share and perform Florence Price’s violin concertos.”

The significance of this recording cannot be over-emphasized. The rising popularity of Florence Price’s music, as evidenced by Micaela Baranello’s recent New York Times article, bodes well for a future classical music scene that dispenses with the historic myth of white male compositional supremacy (both Er-Gene Kahng and I were interviewed for this article). The Fort Smith Symphony in Arkansas is embarking on a recording project of the Price symphonies, and the late Rae Linda Brown’s biography of Florence Price is awaiting release.

Young scholars such as myself are increasingly engaging with works by composers on the margins. I met a few scholars at last year’s American Musicological Society conference who will be exploring Price’s violin and organ works. My forthcoming dissertation will present readings of Price’s art songs through critical lenses including musical semiotics, black feminist inquiry, and Henry Louis Gates’s theory of signifyin(g). It is my hope that interest in Florence Price will lead to a movement that increases visibility of black classical musicians—particularly composers. It is a tragedy that the prolific black writer and composer Olly Wilson recently passed and I have never encountered his name in my schooling. It is a shame that in 2016 the Metropolitan Opera staged its first opera by a female composer (L’amour de loin by Kaija Saariaho) but has never staged an opera by an African American composer.

Until the margins are no more, we must continue to question the segregated concert music hall. Perhaps by decolonizing the lens through which we view the term “American music,” we can begin to divorce ourselves from the white canonical three “B” composers (Bach, Beethoven, Brahms, etc.) and welcome in some new “B’s”—Regina Baiocchi, Margaret Bonds, Brittney Boykin and countless others.