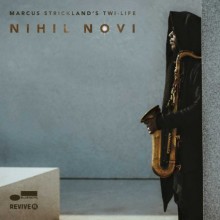 Jazz is the DNA of Marcus Strickland’s Twi-Life’s album Nihil Novi, produced by well-known avant-garde soul singer and bassist, Meshell Ndegeocello. This release is a collection of experimental expressionist jazz, playing upon the listener’s expectations as a strategy to arouse an emotional response. Expressionism is an undercurrent in many of the most recent contemporary jazz releases, such as Kamasi Washington’s The Epic and Terrace Martin’s Velvet Portraits. Perhaps this wave of expressionistic jazz is brought to us by hip hop culture or African American social and political dissent, channeling the emotional component of critique and protest. Might it be part of a larger wave or even school of jazz that the history books might look back on as characteristic of the 2010s? What we know is that Nihil Novi is an album of incredible compositions that are some of the best produced in contemporary jazz. Its songs give a listener some sort of triumphant feeling of melancholy, or what writer Albert Murray would describe as a feeling that can “stomp the blues.”

Every musician delivers on Nihil Novi. Twi-Life is made up of trumpeter Keyon Harrold, bassist Kyle Miles, drummer Charles Haynes, organist Mitch Henry, and keyboardist Masayuki Hirano. Singer Jean Baylor, bassists Pino Palladino and Meshell Ndegeocello, keyboardist James Francies, drummer Chris Dave, guitarist Chris Bruce, and pianist Robert Glasper also contribute. The end product is an album of poignant nuance, thrilling through its multitude of precise sounds and gorgeous songs. If the pieces on Nihil Novi were paintings, they would all be colored in dark hues. All of its songs were expressly composed for this album and fulfill the ambition that much American music has to take a look at the underbelly of things, even though this desire seems to be less present in contemporary jazz than other genres. The record’s songs are poignant, often sounding as if they were deliberately produced to leave us feeling unhinged.

“Talking Loud” features an excellent blend of saxophone, organ, singing and drumming. While the track’s subdued vocals (sung by Jean Baylor) take on a kind of emotionally numbing effect, the band’s playing is this cut’s most engaging feature. Baylor is also featured on “Alive,” which sounds like an R&B song accompanied by a jazz combo. On these two tracks, the vocalist takes turns with Marcus Strickland at being the center of attention, but ultimately the band’s leader delivers a more impressive performance.  “Sissoko’s Voyage” might be one of this year’s best jazz songs—its melody and rhythm exuding a spiritual, infectious optimism. “Cherish Family,” “Celestelude,” “Drive,” and “Mantra” are all expertly composed and played, while “Inevitable” smacks of soul jazz and is perhaps the one song in which Baylor’s vocals shine brightest. “Cycle” may be one of the very best compositions of the year. It speaks to eros and ethos: the pursuit of both laughter and seriousness through balanced living. This is jazz that plays to our notions of play and of contemplation, creating emotional balance through musical proportions. Some will also be reminded of Miles Davis’s experiments in jazz fusion in the later part of his career.

Nihil Novi is one of the best jazz releases so far this year, and is also one of the strongest efforts by a group in any genre. Each and every song is surprising, all the while being deeply rooted in the “stomping the blues” tradition that informs most excellent African American music, and informed by its own moment in American cultural history.