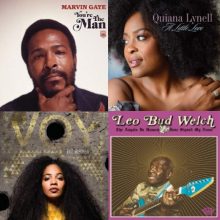 Welcome to the April 2019 issue of Black Grooves, sponsored by the Indiana University Archives of African American Music and Culture. Our featured title this month is Marvin Gaye’s previously unreleased Tamla/Motown album, You’re the Man. This new expanded edition coincides with the 60th anniversary of the Motown label and Marvin Gaye’s 80th birthday.

Wrapping up this issue is our list of March 2019 Black Music Releases of Note.

Following are additional albums released during March 2019—some will be reviewed in future issues of Black Grooves. END_OF_DOCUMENT_TOKEN_TO_BE_REPLACED