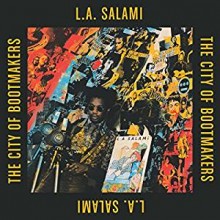 Title: The City of Bootmakers

London musician L.A. Salami created a buzz through a string of EPs leading up to his acclaimed 2016 debut album Dancing with Bad Grammar. Now he returns with his second full-length project, The City of Bootmakers, which continues his folksy style of social commentary.

Born Lookman Adekunle Salami (yes, L.A. Salami is his real name), the singer-songwriter grew up in a household that never paid any particular attention to music, and he didn’t learn to play guitar until receiving one for his 21st birthday. But he was always attracted to literature and seems to have a special affinity for Welsh poet Dylan Thomas and icons of the ‘50s and ‘60s, including Beat Generation authors Allen Ginsberg and Jack Kerouac, and folk musicians Woody Guthrie and Bob Dylan. A dapper nonconformist, Salami has been likened to a modern day troubadour, channeling his experiences into sharply honed lyrics, sung over lush acoustic-oriented alt-rock. All of these characteristics come to the fore in his most recent video single, “Jean Is Gone,” included on the album as a bonus track:

Though Salami is primarily a vocalist and guitarist, he occasionally switches over to harmonica, Rhodes and, according to the album credits, “ambulance.” His backing band, the Bootmakers, includes Simon Nilsson (guitar, bass, piano, organ), Petter Grevelius (guitar, bass, organ, vibes), and Sean Beam (drums, organ), otherwise known as Francobollo, a UK-based Swedish rock band. The project was recorded in Berlin with Robbie Moore (The Mores), known for his retro sound styled after ’60s- and ’70s guitar pop with rich vocal harmonies—the sound permeating The City of Bootmakers.

Easing into the album with the intro “Sunrise,” Salami evokes a Shakespearean-era street scene with a jangly tune reminiscent of an organ grinder. As the music grows louder, a group of revelers greet the dawn with Salami in the lead, inviting the audience to experience the wonders of “the troubadour”—obviously relishing the moniker he’s been assigned in the press. After the revelers fade into the distance, the band kicks into the first single from the album, “Generation (Lost),” a song about “feeling lost during the journey of finding yourself.” Addressing the anxiety of his generation, Salami croons: “I’m penniless, but I’ve sold my soul / I’m restless, but I’ve nowhere to go / Generation L, lost in lust / Generation L, laborious.”

Not shying away from political themes, on “Terrorism! (The Isis Crisis)” Salami sings, “I heard that an ancient book, inspired him to die / The Jihad source decoded wrong, enforces that old line / But when words contort in certain tones, Is it the preacher, scribe or one guy that does the crime?” Other songs, though seemingly lighthearted in character, veer into topics ranging from gentrification to immigration, deportation, and discrimination. But the cheerful pop in major keys and driving 4/4 rhythms can become a bit tiresome, making one wish Salami would break away and dive into deeper and darker territory befitting his themes. That’s why “I Need Answers” is such a welcome departure with its discordant melodies and angst-ridden lyrics as Salami struggles to navigate a path through life.

The album concludes on a similar note with “What Is This?” Existential thoughts become mired in practicalities as Salami sings, “Preachers remind you that the end is coming, but the rent dates comin’, so the end can wait – what is this? What is this?!”

L.A. Salami’s approach to songwriting reflects his artistic bent and roots performing spoken-word poetry. The City of Bootmakers is a fine showcase for this philosopher poet, with lyrics that dig deep into life’s inequalities and oppression, yet are delivered in a manner that offers hope for the future.